ARS President David Phelps recently had the opportunity to help share grazing strategy information with Prime Minister Malcolm Turnbull and Senator Barry O’Sullivan during a visit to Boulia in western Queensland.  Along with Rick Britton from Goodwood Station, David was able to discuss with Mr Turnbull the importance of spelling pastures following drought-breaking rains to allow time for the Mitchell grass to rejuvenate.  You can listen to Malcolm Turnbull’s video of David and Rick talking about the importance of spelling country here. 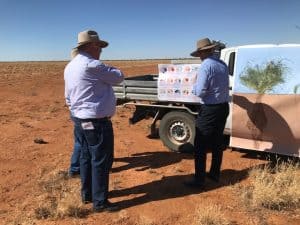 The Prime Minister, Malcolm Turnblull reflects on the drought years he has experienced on his Hunter Valley property, in front of Senator Barry O’Sullivan and Rick Britton (obscured).  The rainfall poster was produced by the Department of Environment and Science and the plant poster is a life size Mitchell grass plant.  Photo: David Phelps 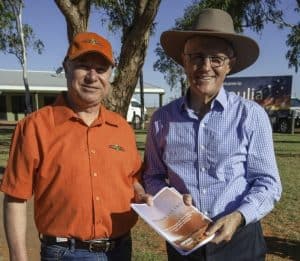 ARS President David Phelps and the Prime Minister in Boulia.  David is (literally) wearing his hat as Chair of the Western Queensland Drought Committee, and presenting the Prime Minister with a copy of the recently completed ‘Beyond the DUST’ report into the economic and social impact of drought on central-western rangeland town business and communities. The reports calls for government to Decide to act, Understand the local situation, Support local solutions and organisations and Transition governance to empower local people. Further information about the report can be found at http://wqda.org.au/beyond-the-dust.  Photo: Ann Britton

As David summarised “I’m pretty happy to have been able to share four generations worth of Phelps passion for Mitchell grass with our Prime Minister, Malcolm Turnbull and Senator Barry O’Sullivan at Boulia. I didn’t get the chance to tell them that the Phelps’ have been intrigued by Mitchell grass for over 140 years, starting when JN Phelps drove a big mob of horses as a young man with the Redfords and Skuthorpes from the Castlereagh River across western NSW and right up into outback Queensland (possibly as far as Camooweal) in the 1870s. I did have the chance to pass on some of that passion, however, and I am sure that the image of Mitchell grass roots extending 1.5m beneath his feet will stay with him for years. Next time the PM passes The Great Hall Embroidery in Parliament House, Canberra, he might even fondly notice the Mitchell grass woven into the artistic account of our nation’s history. Thanks to Mayor Rick Britton for the invitation for me to explain the science behind his successful grazing management”