(From the Range Management Newsletter 15/3)

This study examined ways to reduce rangeland degradation, sustain resilience of livelihoods of nomadic herder communities, and enhance the cultural and biological diversity of desert and steppe areas of Australia and Mongolia using the positive deviance approach. This approach has been developed at Tufts University, Boston, USA for improving traditional activities at the community level in third world countries by identifying what was going right in the community in order to amplify it, as opposed to focusing on what was going wrong in the community and fixing it. For further information see http://www.positivedeviance.org/.

The environment in Mongolia is well suited to extensive grazing and transhumance with its cold and arid climate (Suttie 2005). However, collectivisation in the 1950s led to the development of permanent settlements in many areas and the start of grazing land degradation. De-collectivisation occurred in the 1990s and the responsibility for risk avoidance and economic management changed from state to household where it remains (Suttie 2005). However, social modernisation and the availability of rapid transport has meant that the traditional transhumance pathways have been given lower priority with remote areas of the country being undergrazed (oxidising litter and susceptible to fire) whereas the areas close to urban areas, settlements and permanent water are overgrazed, giving rise to strong ‘piosphere’ effects (Lange 1969; Suttie 2005).

Purpose of the travel

The purpose of this travel was to investigate the present grazing management activities within the Sukhbaatar aimag of eastern Mongolia – specifically around the Erdenetsagaan soum, and to develop and design a joint project based on the positive deviance approach. Discussions with local livestock managers revealed that the older generation still retained knowledge of the indicators of proper grassland management for the region but that this information is usually not used by the present generation. Therefore, the identification of these ‘uncommon successful practices’ is a key step in the positive deviance approach.

Indicators of uncommon successful grassland management in these rangelands would include the diversity of species, canopy cover of palatable perennial pasture plants, evidence of adequate perennial grass recovery after grazing, a well-developed litter layer and adequate animal impact to promote litter decomposition and germination and establishment of new perennial grasses.

The majority of the necessary steps were unable to be completed though the grasslands of Erdenetsagaan soum were generally better managed than other areas inspected and monitored.  This was considered to be not due to ‘uncommon successful practices’ but as a consequence of distance from the capital Ulaanbaatar!  An example of the Mongolian grassland with varying levels of degradation (as defined by ESD – Ecological Sustainable Development) are shown in Figure 1. 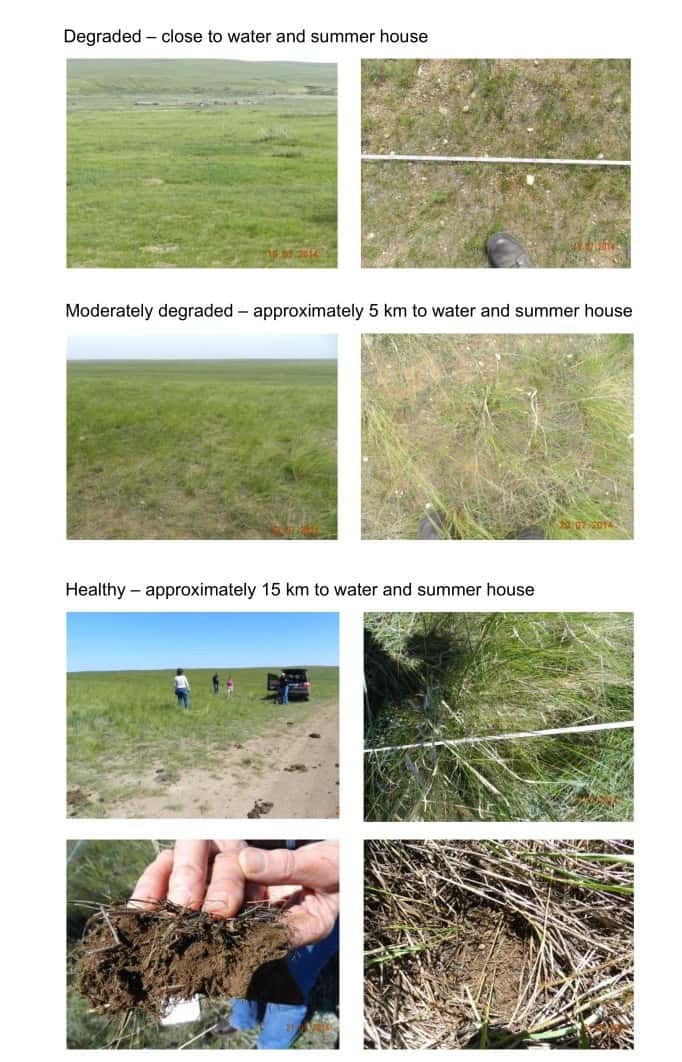 Figure 1.  Examples of degraded, moderately degraded and healthy grasslands across the herding area of one family in the Sukhbaatar region of eastern Mongolia.  Piosphere patterns were seen with increasing distance from both water and the location of a summerhouse (used as base for herding over the summer period).

Steps in the positive deviance approach completed were:

The interviews and monitoring confirmed that the herders contacted were aware of the problems but had not moved to identifying the causes or initiating corrective action. The majority of herders pointed to older herders or practices that seem to be no longer followed that maintained healthy grasslands.

Steps in the positive deviance approach not completed were:

It appears that when approaching grassland degradation using the positive deviance approach, simple and quick measures of current common practice are easily obtained. Discussing these findings with the herders also opened up the conversation about which practices were most likely creating the degradation and possible causes and corrective action.