BETTER LANDSCAPE UTILISATION WITHOUT MORE FENCES – CAN IT BE DONE?

Self Herding for the rangelands has been developed by Dr Dean Revell (Revell Science) and Bruce Maynard (Stress Free Stockmanship). It is a behaviour-based livestock management approach that provides managers with strategies and tools to positively influence grazing distribution. Self Herding draws on scientific studies of behavioural science, nutrition, physiology and ecology from around the world. More information can be found at Dean and Bruce’s website http://selfherding.com/.

How are we testing the method in the Northern Territory?

We have established a trial at Victoria River Research Station (Kidman Springs) in the Victoria River District. Our trial aims to test whether Self Herding techniques can be used to create new grazing patterns within a paddock, thus creating a form of rotational grazing that does not rely on permanent fencing. We selected a paddock that has large contrasts in land condition created by historical grazing patterns. In recent years we have been destocking the whole paddock every wet season to improve land condition in degraded areas. By applying Self Herding techniques, we aim to test whether we can attract cattle to use areas that have previously been under-utilised whilst reducing the use of areas that are declining in land condition.

What Self Herding tools are we using?

We are using feed attractants paired with signals to encourage cattle to make choices in response to positive behavioural and/or nutritional feedback. We use a mobile “attractant station” to achieve managed movements of cattle throughout the landscape. Our attractant station comprises four small feed tubs paired with a visual cue (witches hats placed on a nearby road or firebreak) and an audible cue (a wind chime placed in a tree near the attractant station). Each tub has a small amount of a supplementary feed added to it. Three of the tubs contain familiar feed items (e.g. urea, coarse salt and “Bruce’s Brew”, which is a mixture of locally-sourced wood ash and charcoal). The fourth tub is reserved for the intermittent placement of highly attractive energy-rich “jackpots” such as shipper pellets or molasses. The jackpots are paired with a unique sound cue, which in our case, is a whistle blown loudly at the time the jackpot is delivered. The whistle signal triggers a clear behavioural response, with some animals moving with intent to obtain the reward when they hear the signal. The intermittent use of jackpots keeps the cattle highly motivated to return to the attractant station on the off-chance that a particularly attractive food reward might be there. 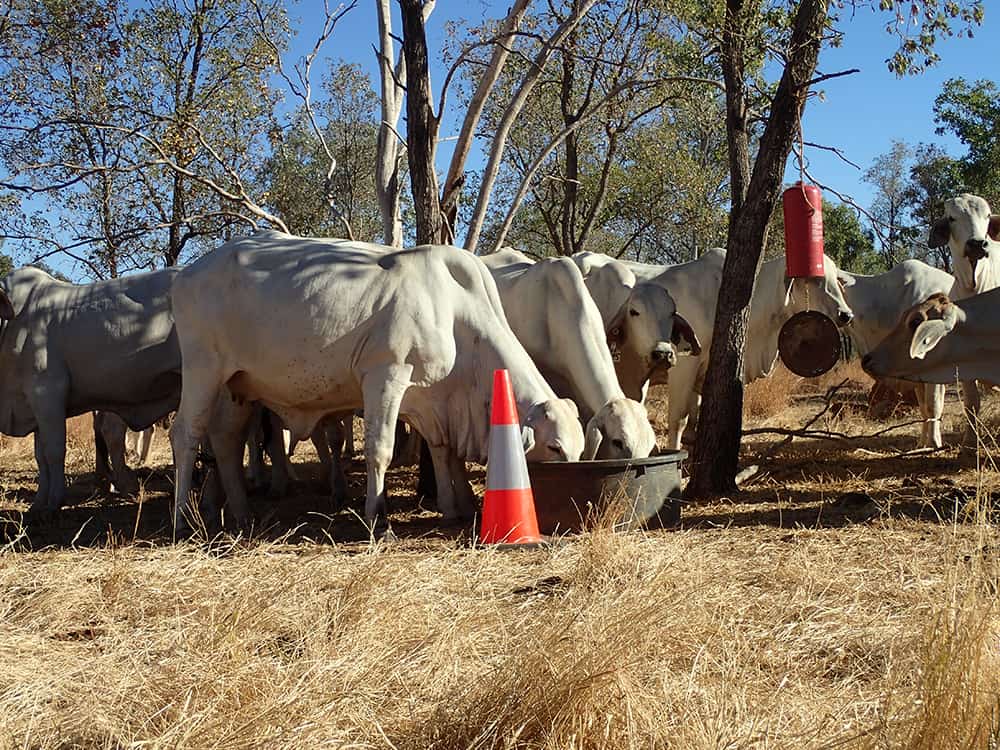 Many producers already move lick around their paddocks, but this method amplifies that approach by offering a varietyof attractants and using intermittent and unpredictable timing. This has the effect of increasing interest for a broader range of animals in a mob.

What have we done so far at Kidman Springs? 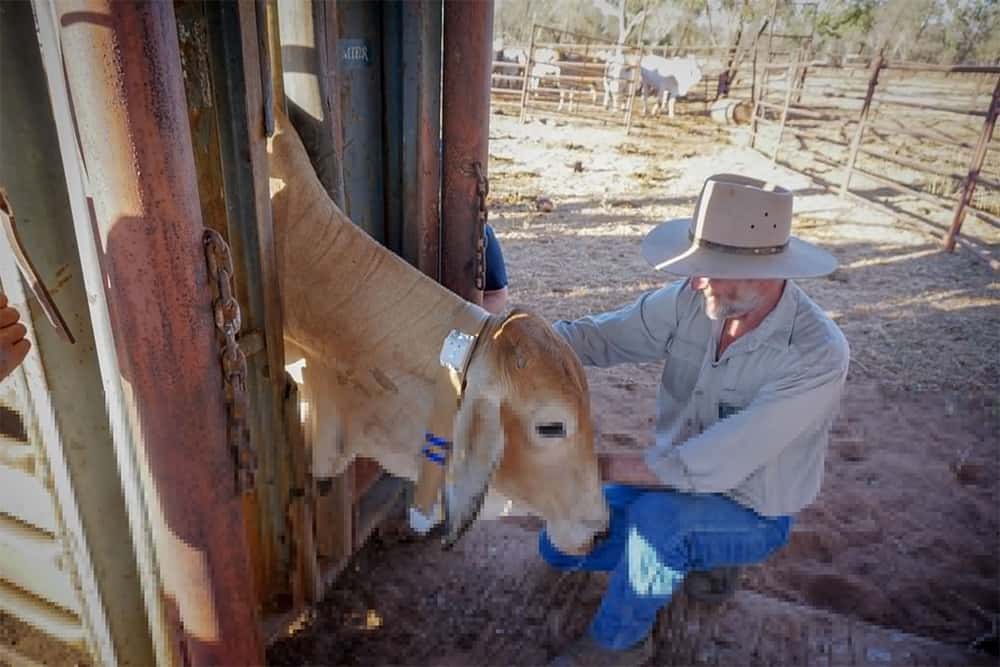 Photo 2: Spud Thomas, Manager at Kidman Springs, fitting a GPS collar to one of the trial heifers (Photo: Caz Pettit)

The GPS data showed that in the first few weeks the heifers demonstrated a very strong attraction to the historically overgrazed areas of the paddock (see Figure 1). We hypothesise that they were responding to existing landscape cues such as old cattle pads, shorter patches of previously grazed pastures and freshly graded tracks. In response, the research team increased the frequency of the feed rewards at locations distant from the overgrazed areas. We have been able to demonstrate that the techniques have been able to draw cattle into areas that have traditionally not been used very much. We have also discovered very different day time and night time paddock usage patterns. 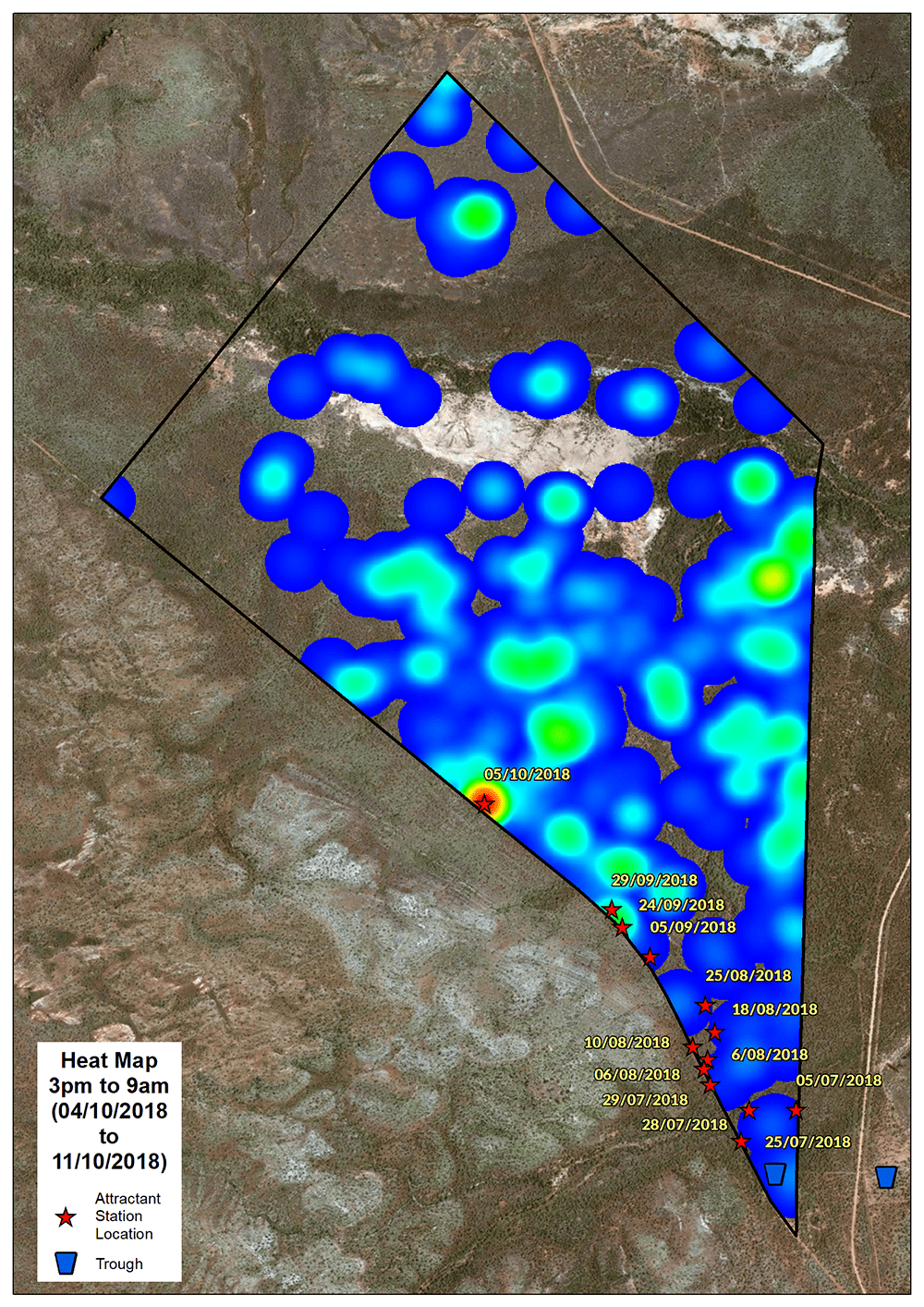 At the conclusion of the trial in mid-2019, we will be reporting on: