BOOK REVIEW: WIZZO – THE STORY OF A WELL AND THE NICOLSON FAMILY (2017)

(From the Range Management Newsletter 17/2)

I was excited to read my copy of Andrew Nicolson Senior’s recently released book ‘Wizzo – the story of a well and the Nicolson family.’  This book tells the story of one of South Australia’s more well-known pastoral families – the Nicolson’s of Middleback, Roopena, Tregalana and Nonowie Stations. 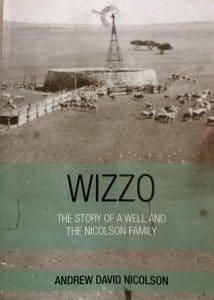 The book outlines the history of the family beginning with John Nicolson, who migrated from the Shetland Islands to South Australia in 1859, and goes on to detail the life of John’s son, George, who began the family’s first foray into pastoral enterprises in the Whyalla area in 1919.  From there, it goes on to explain various land acquisitions and family developments up until the compulsory acquisition of the properties by the Department of Defence in 2013.

In addition to details pertaining to family history and early life on a pastoral property, this book contains some wonderful accounts of early land management practices. There are descriptions of changes from shepherding to a system of paddocks, the building of dams, alterations in shearing practices and the management of the vermin proof fence.   There is also a very detailed account of perhaps the most important aspect of pastoral management on Middleback/Roopena, the securing of permanent water.  Andrew provides a detailed explanation and timeline for the long-term process of supplying the Nicolson holdings with water from Wizzo Well using a gravity fed system of pipes.  Accompanying many of these descriptions are a collection of remarkable photos, some dating back to the early 1920s, which bring the descriptions to life.

Further on, the book details the rather unique interaction between the Nicolsons and the Botany Department at the University of Adelaide through the Middleback Field Research Centre.  Built by Bob Lange, this Centre was used as a base for both undergraduate and graduate students from 1965-2013 (of which I was one) as well as for many visiting scientists from around the world.  The book also dedicates a chapter to the long-term positive relationship between the family and BHP (later OneSteel and then Arrium).

Overall I believe that many readers would find this book an enjoyable read, although perhaps those of us with a personal connection to Middleback may enjoy the family descriptions a little more.   Copies of the book can be purchased for $45 by contacting Lucy Nicolson at lucy.s.nicolson@gmail.com.

Please note that Andrew will be speaking at the upcoming ARS Biennial Conference in Port Augusta.   His invited contribution ‘Middleback Station – a pastoral legacy’ will form part of the Legacy in the Rangelands session on Wednesday 27 September. You’ll also be able to purchase signed copies of the book after that presentation.