CACTUS HUNTING AND CONTROL IN THE SHIRE OF LEONORA

(From the Range Management Newsletter 22/2)

Background and the threat posed by cactus infestations

The Leonora Shire is in the Western Australian Mulga Zone, and is dominated by mulga (Acacia aneura) shrublands and grasslands on extensive wash plains, interspersed with stony chenopod vegetation on greenstones, and halophytic vegetation on the margins of extensive slat lakes – normally dry.  It has been an important mining and pastoral area since the 1890s.

As reported then, the cactus infestations are an unfortunate legacy of the many townships and camps established from the 1890s onwards by companies and individuals seeking gold, who introduced cacti as an ornamental plant in an environment where water is scarce.  Although most of these original towns and camps are long gone, the cactus has stayed!  Further, this large shire (32,189 km2) is still an important mining area, with many new mines and individual prospectors in the area.  Along with the cattle running on pastoral properties, the possibility of further spread of cacti is always a threat.

Most of the Leonora Shire lies within the catchments of Lake Raeside to the south and west and Lake Irwin to the north east.  These ancient river systems, now full of alluvial material occasionally flow – after very heavy rainfall events – several hundred kilometres onto the western fringe of the Nullarbor Plain.  If cactus plants eventually migrated down watercourses into the lakes, it is quite possible that infestations could occur all along these systems.  Preventing this migration is critical.

The formation of the ‘Cactus Hunters’

Led by David Fitzgerald, David Wilcox (until his untimely passing in 2015) and Cyril Linto (ex-Senior Stock Inspector, Department of Agriculture, Kalgoorlie), annual surveys of likely locations for infestations have been conducted since 2005.  The focus is on the two species that are ‘Weeds of National Significance -WONS’, being Coral Cactus (Cylindropuntia fulgida) and Riverina Pear (Opuntia elata).

The ‘Cactus Hunters’ – all volunteers – now comprise David Fitzgerald (Leader), John Walsh, John Morrissey, Ross Norrie and Don Burnside, all of whom have experience in and knowledge of the semi-arid mulga shrubland, and chenopod shrubland dominated landscapes in the Shire.

Although in a semi-arid pastoral area, remote from major settlements, the Leonora Shire is a hive of activity, with many large commercial gold and nickel mines, several smaller mines, numerous prospecting locations and camps, and many people just camping in the bush and doing a bit of metal detecting, all of this mixed in with normal pastoral activities (was sheep, now cattle).

The Cactus Hunters undertake an annual sweep through the shire, checking out areas around Leonora and Leinster towns, Gwalia historical townsite, abandoned townsites, old and new mining activities in the shire, numerous prospectors’ camps (current and abandoned), station homesteads  and tourist stops.  All locations visited are logged with GPS for latitude and longitude.

The Cactus Hunters have benefited from great support from Jim Epis, CEO Shire of Leonora (https://www.leonora.wa.gov.au/), who as well as being an enthusiastic supporter, provides all the resources (vehicle, accommodation, meals and other logistical needs) for the annual surveys, assists in identifying infestations around the town, and arranging for their control with spraying by Pilbara Environmental.

Progress is being made

several other small stands located throughout the shire have also been sprayed, or have been populated with Cochineal (Dactylopious spp.) (Note – Cactoblastis cactorum insects were also introduced onto Riverina Pear but could not persist in the semi-arid environment). 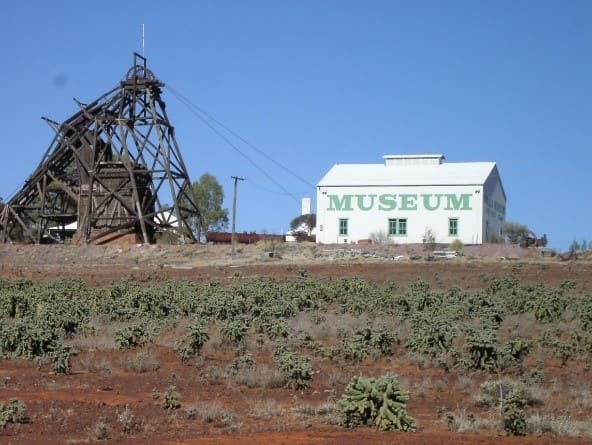 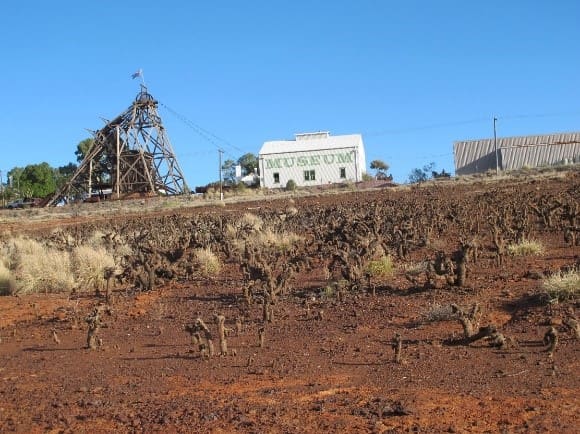 The 2022 survey was conducted between 24 May and 1 June.  The survey had four objectives.

During the 2022 survey, we visited 27 locations as shown in the table below. 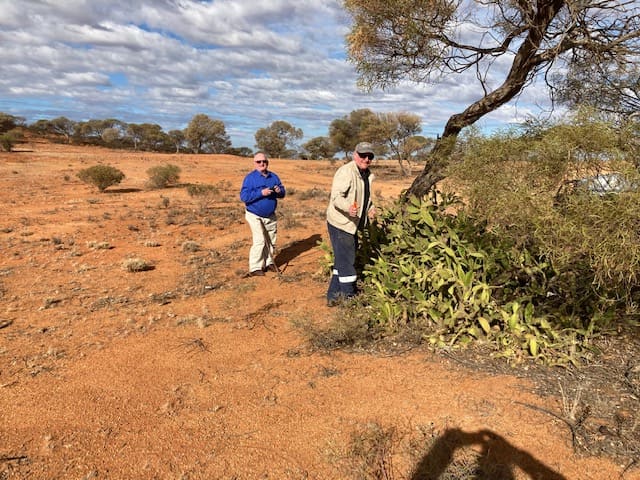 The photo to the left shows David Fitzgerald and John Morrissey looking at a large cactus (Opuntia sp.) at Wilsons Patch, about 60 km north of Leonora.  There are also several Coral Cactus plants at this site, and all these will be sprayed in due course. 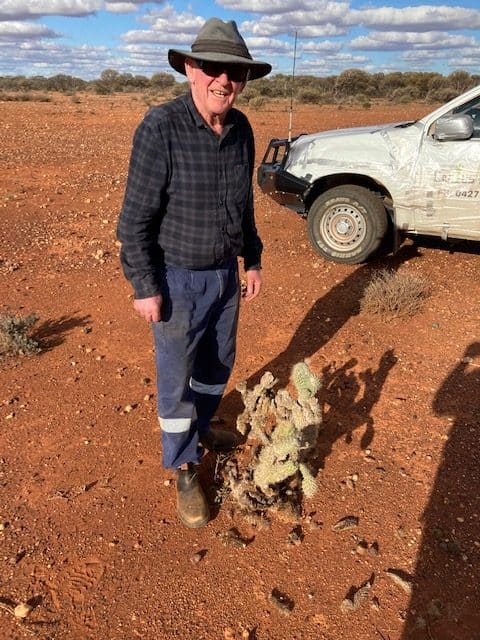 The photo to the right shows John Morrissey with a healthy Coral Cactus located in the old Mertondale townsite area about 30 km north east of Leonora.  Outlying individual plants like this are often difficult to locate, and can be surrounded by many juveniles. 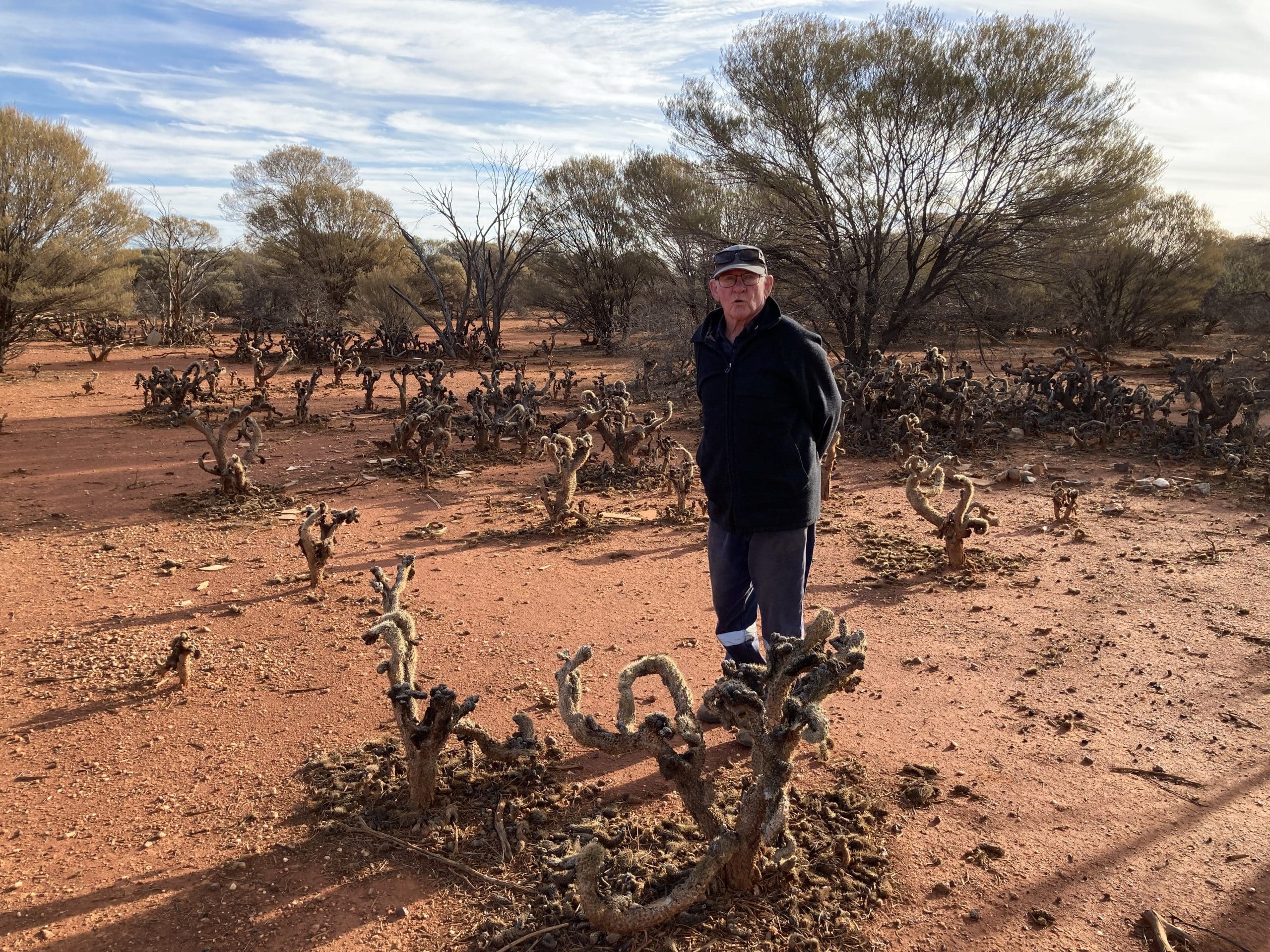 John Morrissey with dead cactus at Slaughter Yard well, showing the extent of the infestation in a mulga shrubland on an alluvial plain not far from Lake Raeside, and the effectiveness of the kill from spraying.

Over the coming months, the Shire of Leonora will engage Pilbara Environmental to find and spray small plants that may have been missed on those sites already sprayed.  Larger infestations, such as the one at Wilsons Patch need to be sprayed.

The many newly identified small infestations have been treated with Tordon crystals which could take 12 months to kill the plants.  The Cactus Hunters will check these in 2023.

The pastoral leaseholders in the shire will be urged to comply with their lease agreements and take action to eradicate known infestations.  The public will be urged to report sightings of cactus, and signage will be placed in town showing the two WONS cactus species, with information about the threat they pose to the environment.

And next year – the existing known locations will be checked by the Cactus Hunters and new locations identified and visited.

And …. we hope that the work in the Shire of Leonora, supported by the Shire and others can serve as an example of what needs to be done and what can be achieved in other rangeland areas known to be infested with cactus. 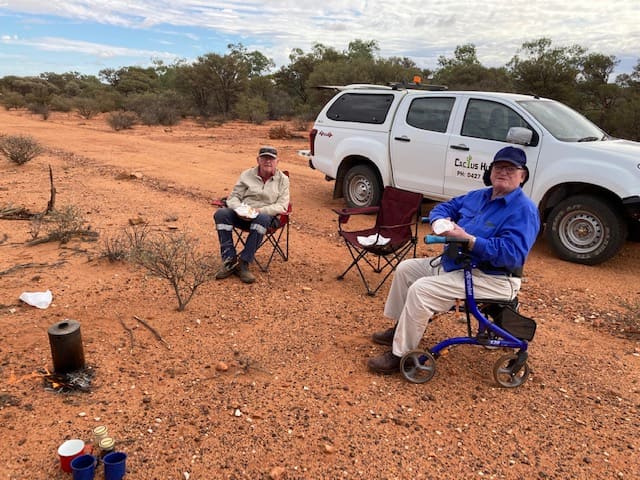 All the Cactus Hunters enjoy being out the bush, telling tall tales from the legendary past, stopping for lunch and billy tea and then enjoying refreshments and a good meal at the White House Hotel in Leonora in the evening, courtesy of the Shire.