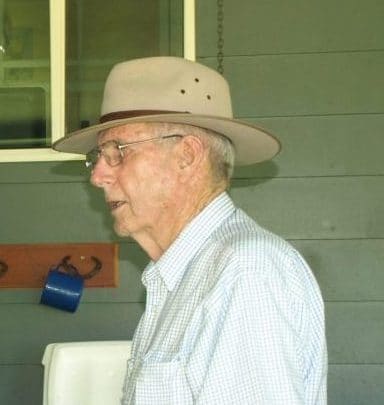 After completing his secondary schooling in the early 1950s, Tom Mann worked on pastoral-company sheep stations in the Central West and the NW of Queensland until he drew “Lockwall”, a ballot block in the Upper Burdekin country in 1958. Building on his formative years in the extensive sheep & wool industry, Tom quickly developed a passion and a keen acumen in the extensive northern beef industry which still endures to this day.

From 1975 to 2010, Tom, initially with Eve and Eve’s parents Bill & Edna Allingham, then with Tom & Eve’s children Bill, Liz and Jack, built Hillgrove Pastoral Company into a beef business that was successful by any measure. Not content to rest on his laurels and simply enjoy the resultant benefits, Tom gave much back to the local community and the northern beef industry:-

Tom has successfully integrated all facets that are essential in managing an extensive beef enterprise in northern Australia; ie land/pastures, livestock, family/staff, economics/finances and marketing.  Visitors to Hillgrove have always found Tom to be an open book about all aspects of the management of Hillgrove.

The Australian Rangeland Society Award of Excellence in Rangeland Management

The Award of Excellence in Rangeland Management recognises people who are making or have made an outstanding contribution to rangeland science and or management, regardless of membership of the society.  More details about the Award and the nomination procedure is available on the ARS website.