IS GULLY EXPANSION A MAJOR ISSUE FOR KEY BIODIVERSITY IN ARID LANDS?

My EMU colleagues and I have attended major regional biodiversity conservation workshops in Outback Australia aimed at identifying priority threats. When we raised the issue of expanding gully erosion and landscape droughting, it has sometimes been explained to us that gullies are more relevant to pastoral contexts (sheep and cattle stations).  “Soil erosion is caused by overgrazing on cattle stations; that is not what we are talking about at this biodiversity workshop”.  The implied belief is that the management of the physical environment is not part of biodiversity conservation and perhaps that biodiversity conservation is not important on grazed lands?  It is almost as if the biological interactions occur in the clouds regardless of landscape succession processes (Figure 1). 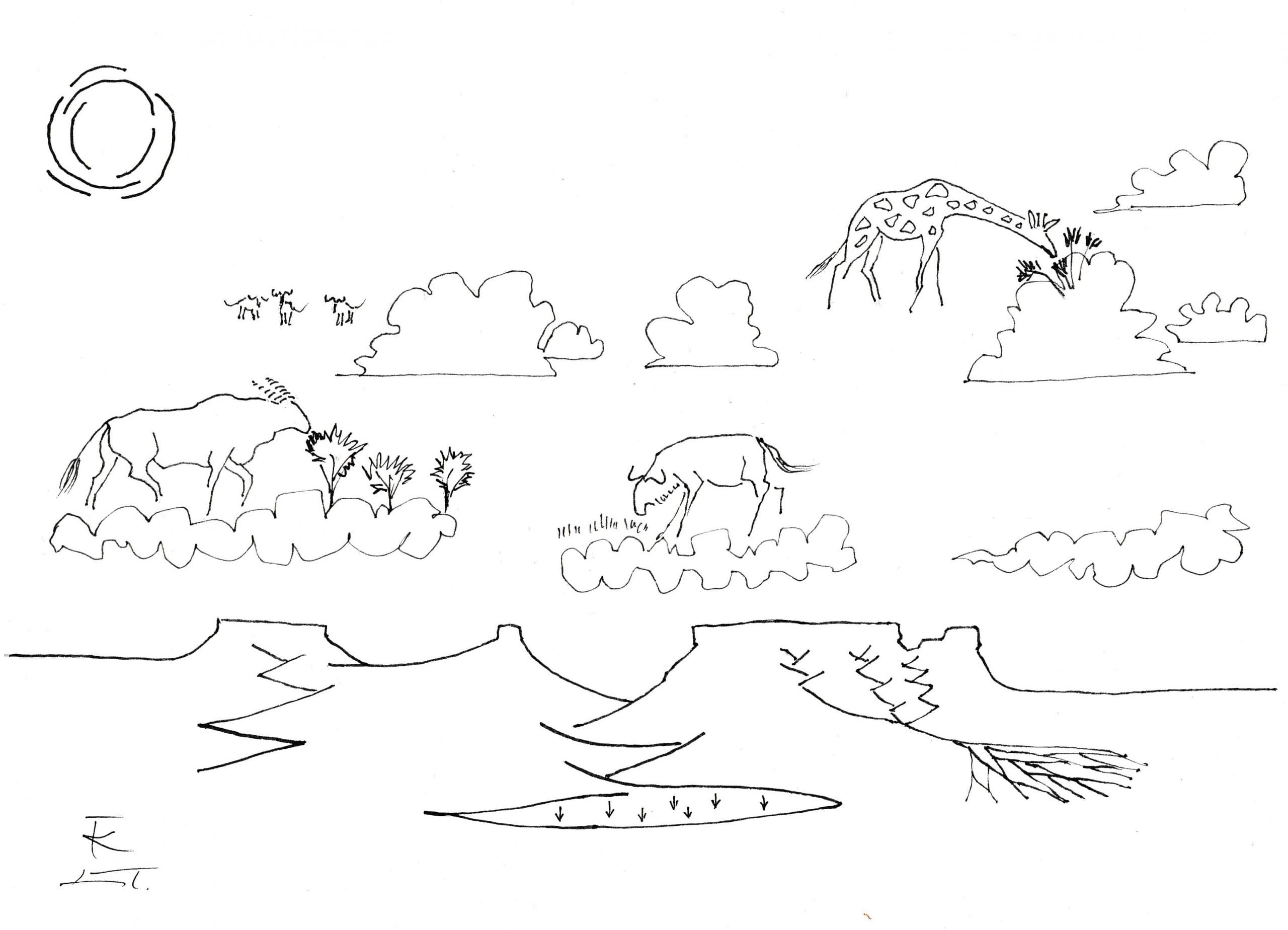 Figure 1. Biological interactions occurring in the clouds. Physical landscape form, function and trend are too often ignored! (Drawing by Ken and Lynne Tinley ©)

The importance of natural hydrological regimes to their habitats: Natural creeks usually start in uplands and spread out as they meet flatter land, distributing channel flow into fingers and sheet flow as fertile floodout fans (Schumm, 1977). Gullies generally form and grow wherever the land has been cut and “waterfalls” are developed that then cut back in the direction of strongest flow (Figure 2, Pringle et al., 2011).  Natural creeks generally develop in steep country where small flows come together and gain energy (tributary pattern) and then rapidly lose energy on meeting flatter land and tend towards distributary flow. That flow then ends up gently soaking floodplains below (Figure 3). This natural pattern of tributary, then distributary flow and then bottomlands has local wetlands from the top of the catchment (e.g. local grassy drainage depressions) down to the floodplains with major swamps. 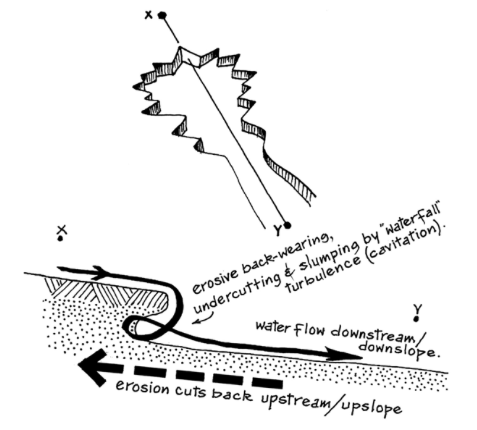 Figure 2. How most gullies are formed by cutting upslope from any type of incision. 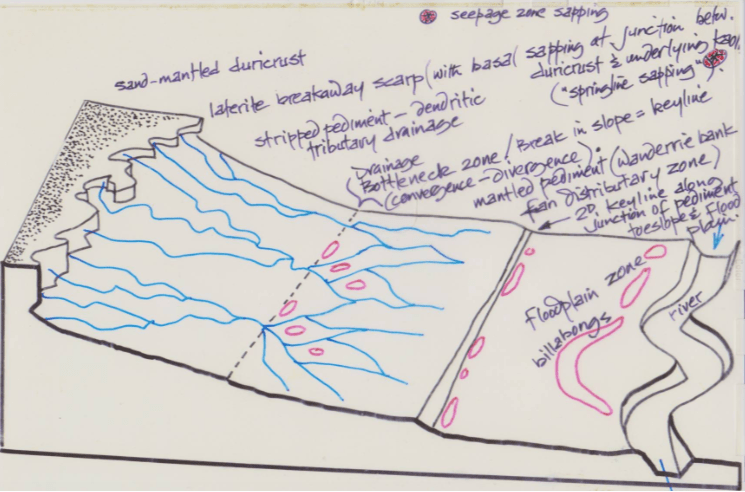 Figure 3. An example of how upland tributary flow spreads at the key line and then hydrates the bottomlands in a healthy system. This isn’t always so simple in real, large catchments.

The different wetland “jewels in the crown” support a different suite of species to their wider landscape and have evolved together in an evolutionary partnership. Wetlands – be they small pans or large floodouts, swamps and floodplains – dry out last and are critical drought buffering habitats (McNaughton, 1983; Stafford Smith & Morton, 1990; Morton et al., 1995; Duguid et al., 2005; Fynn & Bonyongo, 2011; Morton et al., 2011). They are biologically distinctive and most vulnerable to livestock pressures as seasons decline.

Can these critical drought  buffering areas and the broader landscape realistically be understood bio-centrically as suggested in some text books on ecology (Krebs, 2009) or do we need to return to a more holistic ecology in this specific regard (Cowles, 1901; Clements, 1916; Cole, 1963; Tinley, 1982)? Can earth sciences complement biological approaches in understanding landscape behaviour (Pulley et al., 2018)? Should key biodiversity values be managed wherever they occur (Kain, 2008)?

Has contemporary bio-centricity been adequate? The Wetlands Indaba in Kimberley, South Africa (2018) was exceptional in the attention paid to physical earth processes.  Professor Fred Ellery epitomised a wide-eyed view of landscapes (Pulley et al., 2018) and his students will benefit from this holism. He presented the idea that gully erosion could create wetlands in the specific contexts, which makes sense and begs different thinking in planning restoration. Should all gullies be “healed” or are at least some of them part of a long-term geological succession that created for instance upland valley floors with wetland systems? One might pragmatically err on the side of stabilising gully systems given that contemporary land use pressures are at least exacerbating, if not initiating landscape incision (Mabbutt et al., 1963; Cooke & Reeves, 1976; Fanning, 1994; Pringle et al., 2011).

In some cases, landscape incision can create new local habitat elements such as scrub-lined channels in grasslands (Pringle et al., 2013; Tinley, 2015). The inclusion of a new patch type would certainly increase habitat diversity, but that might be at the cost of the function of a vulnerable ecosystem (e.g. structural grasslands) with the addition of an assemblage of plant species thriving on human disturbance regimes and their commensals (e.g. birds that use that habitat patch)?

Landscape incision by gullies is not the sole cause of wetland dysfunction. Overgrazing can destroy local wetlands by flattening them out or filling them up with sediment without any involvement of gullies. A good example of this is on alluvial plains or plateaux with cracking clay soils that form gilgai ponds when healthy due to the wetting and drying cycle of clay minerals.  When consistently overgrazed these wetland patches become part of flattened, water-shedding surfaces through compaction, but are recognisable as pale coloured patches in a darker mosaic of fine ironstone lag. Similarly in-channel pools can be filled with sediment from accelerated erosion in the hinterland.

The most biologically-impoverishing process is gully development and expansion because it targets all of the most ecologically important components of most rangelands that are active catchments (as opposed to vast, deep sand plains without much surface drainage) (Pringle & Tinley, 2003; Pringle et al., 2006; Pringle et al., 2011). The cause is usually a cut into the natural  landscape base level, be that a broken rock bar across a river (Figure 4), a poorly located watering point or farm road  and the accelerator mechanism is the lack of ground cover that feeds gully heads and accelerates their expansion through increased runoff (Pringle et al., 2011). 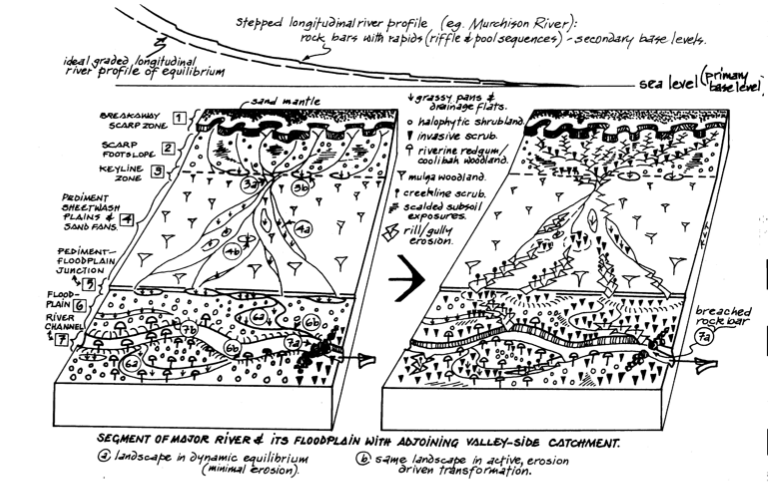 Figure 4: A functionally healthy valley sequence to its floodplain and then how the whole drainage ecosystem can become essentially a ”tiled roof with drain pipes”, etching out all the critical habitats in the process (Pringle & Tinley, 2003).

Any wetland that overflows to another system via a soft sill, the feature that acts as a natural dam wall, is vulnerable to reduced productivity and biodiversity through losing its capacity to harvest and pond water through breaching by gully heads (“pulling the plug out of the bath”). This can occur at small or large scales, for instance a small drainage basin (Figure 5) or a major wetland such as the Urema Lake at the base of the Great African Rift Valley  in the Gorongoza National Park (Tinley, 1977). In both cases, animal paths or other linear incisions such as roads can “unplug” the system.  At Urema Lake, thousands of hippopotami travelling from lake pools at night to forage locally and between the lake and more drought persistent pools in the Pungwe River, not livestock, initiated the gullying that breached the major wetland system. In increasingly fragmented “wild” landscapes dedicated to biodiversity conservation (Fynn, 2012), active biodiversity management may need to deal proactively with these issues. 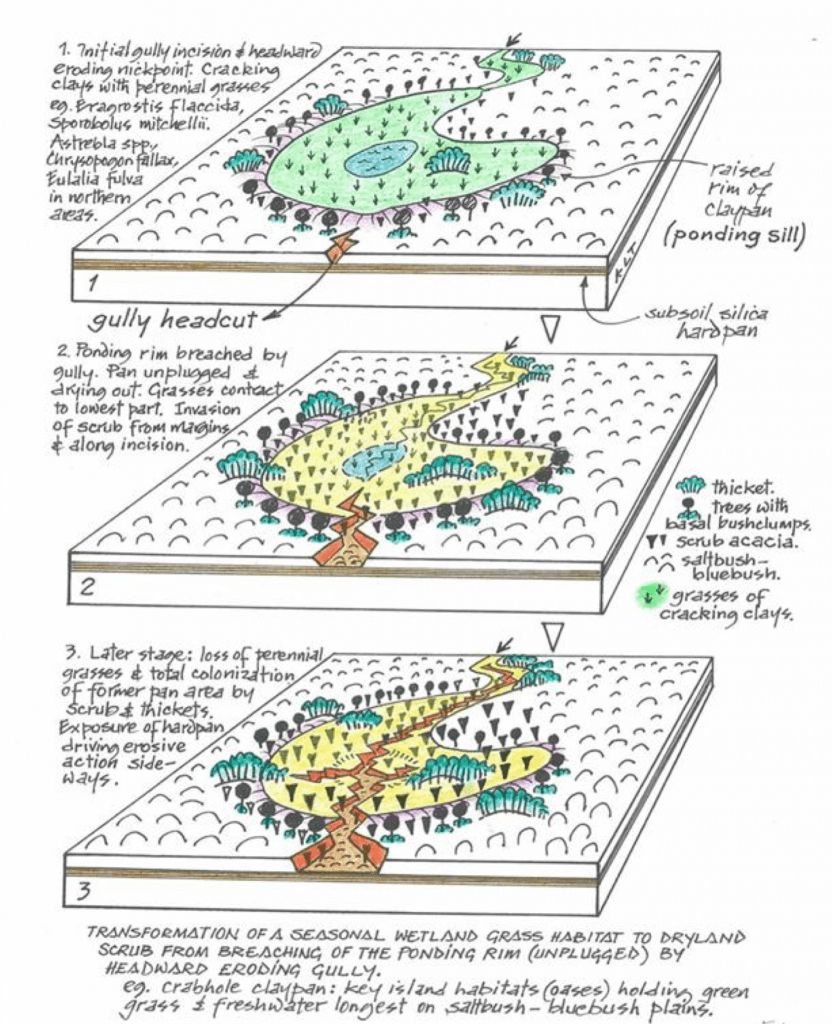 Figure 5. The unplugging of a wetland (Ken Tinley).

So do we need a more holistic understanding to solve these issues? Is erosion the particular problem of farmers and pastoralists or also of those who aspire to manage biodiversity values in an increasingly fragmented landscape (Fynn et al., 2015)?

Prevention is better than cure

If one believes that prevention is better than cure, it is imperative that all activities that involve the unnatural cutting of the natural landscape are stopped, or planned very carefully. In particular, the sills that hold up the ponding of local wetlands should be protected on-site.  For instance, by locating artificial watering points across slope rather than on, above or below wetland sills and avoiding track alignment near these fragile areas  can minimise the threat of initiating gully head cuts into them from downslope or  the diversion of flows elsewhere from upslope areas (Pringle et al., 2019). The key issue is to maintain critical natural landscape base levels that enable water retention, thereby supporting all of the key biodiversity values that result from nested patterns of small to very large wetlands, the “jewels in the crown” of any drainage ecosystem.

Landscape incision is episodic but fast. It often works against natural, slow landscape succession processes that create areas of greater soil moisture balance and landscape productivity (Noy Meir, 1980) as well  as critical, nested, drought buffering habitats (Newsome, 1980; McNaughton, 1983; Illius & O’Connor, 2000). Human-induced gullies and their devastating effects of landscape droughting and reducing  ecosystems’ drought buffering are not an issue specific to commercial land use as causative processes also affect lands set aside for biodiversity conservation. Gully development adheres to the laws of physics everywhere and can affect any land where a nick point is created by the cutting of the natural land surface. Generally, the effects of gully development and expansion are at odds with most land management objectives, especially in relation to wetlands in their wide, arid context. Most importantly, gully head cuts are usually expanding their “stealing” of rangeland ecosystems’ most valuable resource: soil moisture.

Ken Tinley (DSc.) opened my eyes to the importance of physical landscape succession processes in ecological land management whatever the primary and other objectives of those managing the land. He also drew all the diagrams in this article, in cases with help from his wife Lynne. The Tinleys and Russell Grant kindly reviewed the initial drafts in detail.  A very similar version of this paper was published last year in Grassroots, a similar publication of the Grassland Society of Southern Africa . Grassroots (2020) Volume 20, Issue 1 pp3-6. The GSSA is thanked for allowing this republication in Australia.

Clements, F.E. (1916)  Plant Succession: An Analysis of the Development of Vegetation. In. Carnegie Institute of Washington.

Cole, M. (1963)  Vegetation and geomorphology in northern Rhodesia: An aspect of the distribution of savanna of Central Africa. Geography Journal, 129, 290-310.

Cowles, C.C. (1901)  The physiographic ecology of Chicago and vicinity: A study of the origin, development and classification of plant societies. Botanical Gazette, 31, 73-108.