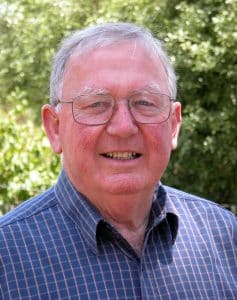 In 1965, Cyril Kleinig, a young scientist at CSIRO’s Plant Industry, Riverina Pastoral Laboratory was tragically killed in a small-plane crash near Deniliquin. His colleague and passenger, James Noble, survived. Movement of his damaged legs though, remained a lifetime problem for Noble. Typical, in his spare time he prepared and published the research papers from the truncated research program of Kleinig. He remained an innovative and prodigious scientific author with an underlying view that aerial management of rangeland vegetation was undeveloped and could be economical.

Jim Noble grew up in Sydney. He studied at Hawkesbury Agricultural College in 1957, and worked as an agronomist until 1963 at Yanco, Cowra and Deniliquin. He was a rural reporter for the ABC in Melbourne and Horsham in 1964 and at the end of the year joined CSIRO’s Riverina Pastoral Laboratory, Deniliquin as an agricultural extension officer. About this time the research of the laboratory began shifting from agronomy of irrigated crops and pastures to the management and ecology of pastoral lands internationally known as rangelands. Noble embraced this transition and studied botany externally at University of New England, where he gained a BA (Plant Biology) and a LittB (Botany) supervised by Wal Whalley, a renowned plant biologist. In 1974, he moved to University of Wales, Bangor, and researched for his PhD, the population biology of rhizomatous plants in a sand dune community. He was supervised by John Harper, an eminent plant ecologist.

On Noble’s return to CSIRO’s Deniliquin Laboratory in 1977, he pioneered an ecology and management research program for the Mallee ecosystem of semi-arid south eastern Australia. He found the pastoral value of these lands could be increased by autumn burning; autumn fires reduced growth of mallee trees and spinifex for several years and at the same time promoted germination and abundant growth of a diverse group of palatable herbaceous plants. Noble thought the cost of prescribed burning could be substantially reduced by aerial ignition. Trials confirmed this but NSW National Parks intervened and banned the aerial ignition of Mallee vegetation. The abrupt ending of that part of his research was of concern to pastoralists who widely supported his research. Noble continued his mallee research and went on to publish, with others, two books on the ecology and management of Mallee.

CSIRO’s Riverina Pastoral Laboratory was closed in mid-1990 and Noble along with other staff moved to Canberra to continue rangelands research from the headquarters of CSIRO’s Wildlife and Ecology. Here, Noble began researching aerial management of semi-arid woodlands that had “flipped” into a less productive state where native shrubs dominated at the expense of perennial grasses. Earlier experimental fire research indicated that density of shrubs could be significantly reduced by two autumn fires, one or two years apart. Noble thought that a second fire after prescribed burning, or wildfire, could be simulated by aerial application of glyphosate herbicide. He found the concentration required for a lethal effect was low which made aerial application economical. Although this novel approach to shrub management was profitable and effective, uptake was inevitably slow in a conservative community. Recent Federal Government payments to pastoralists to keep their semi-arid wooded landscapes in a shrub-dominated state to sequester more carbon, has removed the incentive to restore pastoral productivity in most of these rangelands.

Noble remained scientifically inquisitive throughout his research life and often studied interesting ecological questions arising from his field observations. These activities, more common in the past, were known as CDK (Chief Doesn’t Know) research. His serendipitous research resulted in many significant publications on a wide range of topics, such as the role of emu’s in the population dynamics of Dillon Bush, the role of now locally extinct Burrowing Bettongs in maintaining low shrub densities in woodlands, the biodiversity implications of water management in the Great Artesian Basin, and the ethno-ecology of mallee root-water.

Noble enjoyed writing and his most enduring legacies are the many books, book chapters and papers he authored, on the ecology and management of Australia’s semi-arid rangelands.

Noble died in Bowral, NSW, on 10 September 2020 after several years of poor health. He is survived by his wife, four children, and 12 grandchildren.