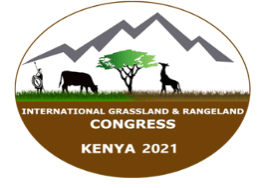 This was also the first virtual congress for both the IGC and IRC. The time zones were certainly a challenge, as was the technology at times, especially on the first day! Despite being all virtual, it was amazing to hear delegates comment that they enjoyed the opportunity to have stimulating discussions with friends and meet new colleagues. On the last day/night (depending on what part of the world you were in), a few of us sat around one of the virtual “tables” sharing a whiskey and debriefing. Networking and catching up with friends is one of the best aspects of International Rangelands Congresses and it is amazing that this continued to some extent in the virtual world.

Tours are always a highlight of Rangelands Congresses. The virtual tours showcased Kenyan culture, which to me is personified by colour and caring people … and sometimes chaos! Still there is magic in Kenya and hopefully we will all be able to visit soon.

Overall, papers from the developed nations were under-represented, with approximately half from sub-Saharan Africa, China and Mongolia compared to about 10% from Europe and North America (Coppock this congress).  While less Australians than normal may have attended the Congress, seventeen of the oral presentations had at least one Australian author.

The program brought together in the Kenyan Committee was exciting with a theme of “Sustainable Use of Grassland and Rangeland Resources for Improved Livelihoods.”  The papers and poster covered seven themes, two predominantly on grasslands and forage, and rest mainly rangelands. The disciplines represented has certainly changed over the years. The two themes related to social aspects had the largest numbers of papers, with the ecology theme having a similar number of papers. The trend towards a greater inclusion of social science in projects is evident as approximately 75% of papers included a discussion about social aspects of rangeland management; stakeholder participation in projects is now the norm, rather than the exception (Coppock this congress).  In addition, about 60% of the papers reviewed stated that policy is important, yet “hard” policy analysis is rare (Coppock this congress).

The Keynote speaker on livestock production systems was the Director of ILRI (International Livestock Research Institute), Jimmy Smith. He highlighted the need to consider livelihoods  for African pastoralists in the face environmental concerns and “less meat” agendas, and urged delegates to embrace change, harness diversity and engage widely. The papers on wildlife-livestock interactions almost universally accepted that maintaining open spaces was good for wildlife. Community based tourism and conservancies in Africa were also discussed.

The topics of climate change and drought management in the rangelands were particularly topical, as Kenya and many other African countries are in the grips of drought. The Keynote speaker on this topic was Mark Howden, from the Australian National University and one of the co-authors of the recent IPCC report. Papers in these sessions highlighted the need for early action for effective drought management and the need for better integration of farmer expertise and science-based approaches (Andrew Ash, this congress). Soil carbon was mentioned in numerous papers; other topics were traditional practices, mobility as well as prescribed grazing, prescribed fire and soil seed banks (Barry Irving, this congress).

Pastoralists knowledge, often based on Traditional knowledge, was seen as a powerful asset that needs to be better appreciated, both knowledge about the environment and knowledge about governance systems that may help us live more easily in the future of uncertainty (Jonathon Davies, Keynote speaker). Another discussion highlighted how the pastoral way of life is important culturally, and how pastoralists are helping to protect biodiversity, water and food security (Saverio Kratli).

The value of pastoralists was reiterated by Nahid Naghizadeh, the Keynote speaker on pastoralism, social, gender and policy issues. She said “leave no one behind” by ensuring that we involve pastoralists governance institutions in decision-making and policy-making processes about their lives. This congress certainly tried to incorporate pastoralists views. A documentary is underway on the values and challenges of using Traditional and Indigenous Knowledge in African rangeland management.

The papers, posters and handouts will be available online for Congress delegates for the next 3 months. In addition, everyone can access the written papers, and soon the posters, from the Congress area, free of charge, thanks to Ray Smith, Chair of the International Grasslands Continuing Committee: https://uknowledge.uky.edu/igc/

During the Congress, the Business Meeting for the International Rangelands Congress Continuing Committee, appointed David Phelps as the new President. It is unusual to see consecutive Presidents from the same country, with Dana Kelly retiring from her term as President. Nicole Spiegel is the new Australian committee member.  For the next term until the Australian IRC in 2025, the new committee will focus on revitalising its role. In line with several of the Resolutions passed, this includes increasing diversity both internally, and externally with collaborative partners. Fostering Traditional and Indigenous Knowledge is also part of the new agenda.