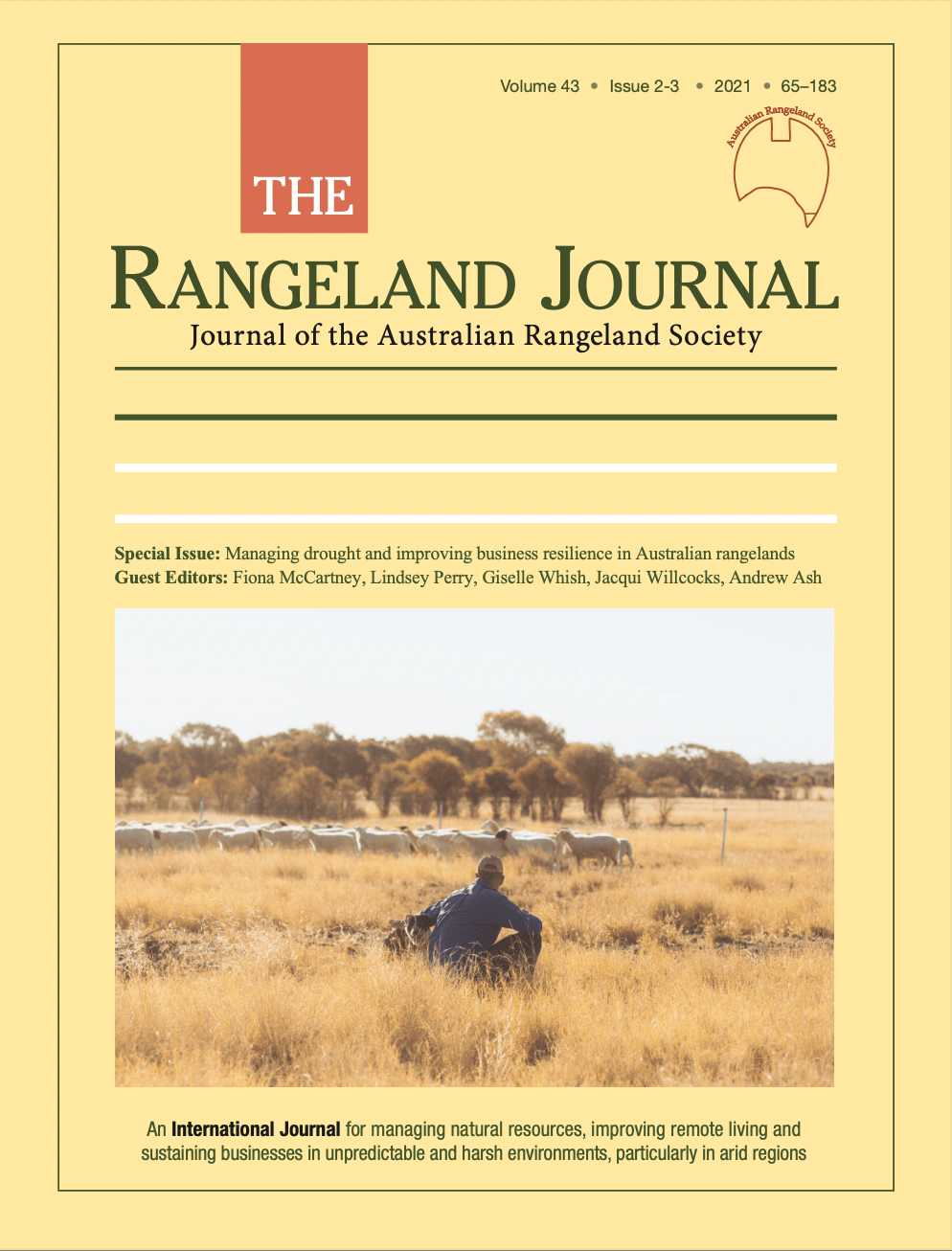 A Special Issue of The Rangeland Journal has recently been released focussing on ‘Managing drought and improving business resilience in Australian rangelands’.  This collection of 10 papers has been published as Volume 43 Numbers 2 & 3 2021.  Abstracts and links to each paper are given below.

Achieving drought resilience in the grazing lands of northern Australia requires emphasis on drought preparation, in addition to appropriate action in response and recovery phases of drought. We describe a farm-management economics framework to inform decision making as an approach to enable more profitable and drought resilient extensive livestock production systems across northern Australia. Key to this approach is increasing the adoption of strategies that enhance drought preparedness.

This paper discusses the evolution of Australia’s National Drought Policy from 1992 to 2020. It highlights the consistency in both the objectives of the policy and the only partial success in achieving those objectives. This arises from the tension between the political imperative to respond during drought events and the desire to promote self-reliance and drought preparedness among farmers.

The Northern Australia Climate Program (NACP) is a fully integrated research, development, and extension (RDandE) program operating across extensive pastoral regions of northern Australia. The NACP aims to improve existing climate models and forecast tools, develop new products to meet user needs and build the capacity of rangeland producers to manage the challenges posed by droughts (or failed wet seasons) and climate variability. The program is contributing to positive outcomes in terms of awareness and knowledge of climate forecasting and products, and their adoption and use in decision making (i.e. practice change).

The transition towards greater drought adaptiveness will demand cultural shifts in the way that drought is defined and approached as an issue facing primary producers. This paper presents the results of a discourse analysis of media and government accounts which found two different ways of framing drought and its management in Queensland agriculture. Lessons for building the cultural salience of drought preparation and adaptation is discussed.

Mapping drought declaration areas from 1936 to 1964 for Queensland, Australia

Maps showing drought declared areas in Queensland, Australia, have been an important communication tool. Drought declaration maps are helpful for studying historical droughts and related studies. There were no official maps of drought areas of Queensland before 1964. Historical railway documents describe drought locations because railways were a key part of drought support. Geographical methods were used to reconstruct maps of drought areas to 1936. The new maps then allowed for an estimation to size of the area of drought in Queensland from 1936 to the present day.

Year-to-year variability in rainfall is recognised as a major issue in managing grazing enterprises across Australia’s grazing lands. ‘Queensland’s multi-year Wet and Dry periods: implications for grazing enterprises and pasture resources’ describes the process of classification, the relationships to known ‘remote climate forcings’, and some of the implications of multi-year Wet and Dry periods. This new understanding will be used as support for extension products (i.e. Wet and Dry period rainfall posters) to guide grazing land management for Queensland grazing properties.

This paper reviews previous approaches in calculating long-term carrying capacity (LTCC) of livestock in Queensland, Australia during the 1990s and 2000s. Components of the successful south-western Queensland implementation are examined, along with subsequent Grazing Land Management workshops conducted across Queensland over the past two decades. A new online system is described (The FORAGE Long–term Carrying Capacity Report), along with processes, inputs and outputs and how the key components required for successful implementation are currently delivered and can be improved.

This paper describes the methods used in calculating and verifying LTCC in FORAGE and the modelling outputs for the LTCC report. The LTCC information obtained from the FORAGE system can be used as a starting point for discussion on grazing land management. A request for a LTCC report can be submitted from the Long Paddock/FORAGE website; the report is emailed back to the user when it is completed by the FORAGE system.