The quest for pasture plants better suited to modern domestic livestock industries than native pastures goes on.  What can we learn from the attempts of the last century?

I have been revisiting old pasture evaluation sites in western Qld recently – some mine, others planted by CSIRO and other DPI researchers.

First thing to appreciate is that the search in those days was sometimes for pastures to replace dense shrublands that had minimal natural pasture beneath them – dense mulga, gidyea and brigalow scrubs.  In other places, the native pasture had been decimated by cultivation for crops or overgrazing with the aid of expensive supplements.  Long gone were the pioneering years when European stock “had the decency to die before the pasture.”  Use of bore water for crop irrigation has also created small areas of scalded land.

So, what have we got to show for the huge effort put into this pasture search in western Queensland, west of the eastern Maranoa region?  Buffel grass, stylo, maybe desmanthus, and weeds, both native and exotic.  Mention is needed also of the native Mitchell grass and oldman saltbush.  I am discounting lucerne because it does not persist more than a few years in grazed pastures in western Queensland.

Buffel grass (Cenchrus ciliaris) (Photo 1) with its various types has been the standout success and has been sown and established on millions of hectares that were once woodlands or shrublands.  It is not without its issues, with invasive tendencies the one most reported globally.  Probably the biggest long-term problem in Queensland has been the introduction in commercial lots of its seed from the USA of parthenium and florestina weeds.  No plant fits the bill perfectly and all have some downsides, even native species.  Some writers go so far as to classify all species that are not endemic to an area as weeds or pests – unless they are human or cuddily cute.

Stylo (Stylosanthes aff. scabra) (Photos 1 and 2) has come to notice in western Queensland in more recent years, probably through slow genetic drift to adapt to the soils and climate of western Queensland from its more frost-free origins.  Many different lines were sown at the research sites such that it is now virtually impossible to nominate the parent line by visual means.  The perennial Seca type is certainly persisting and slowly being deliberately sown by pastoralists on soils that suit it.  The ‘caatinga’ types (S. seabrana) are also exhibiting great persistence but not yet to the 40-plus years shown by the Seca type to date.  However, the total area with a significant component of stylo in the pasture is still very small in western Queensland at present.  Such persistence has occurred NW of Longreach, east of Blackall, south of Roma and SW of Millmerran.  I can provide directions to these sites if others wish to see for themselves. 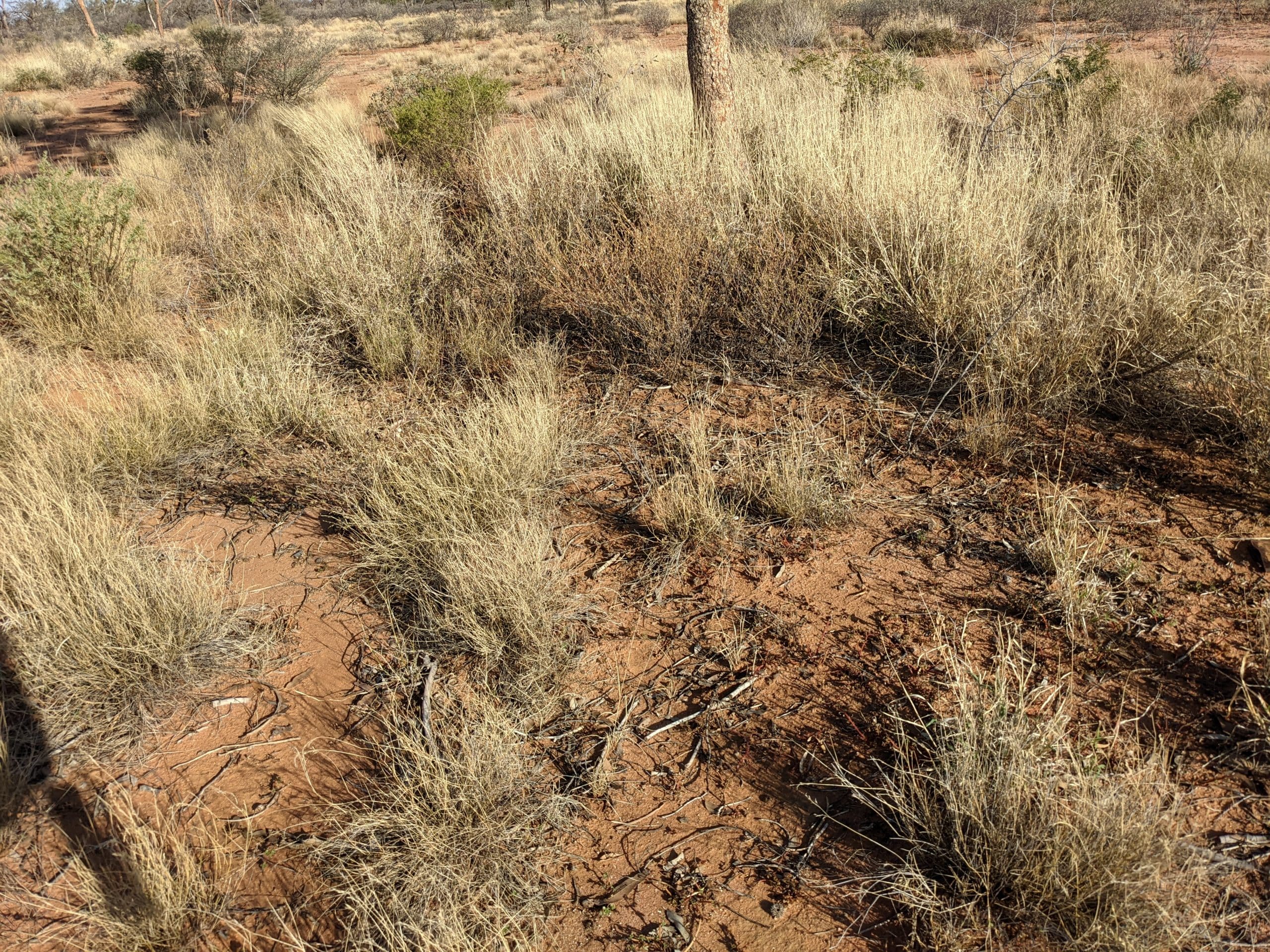 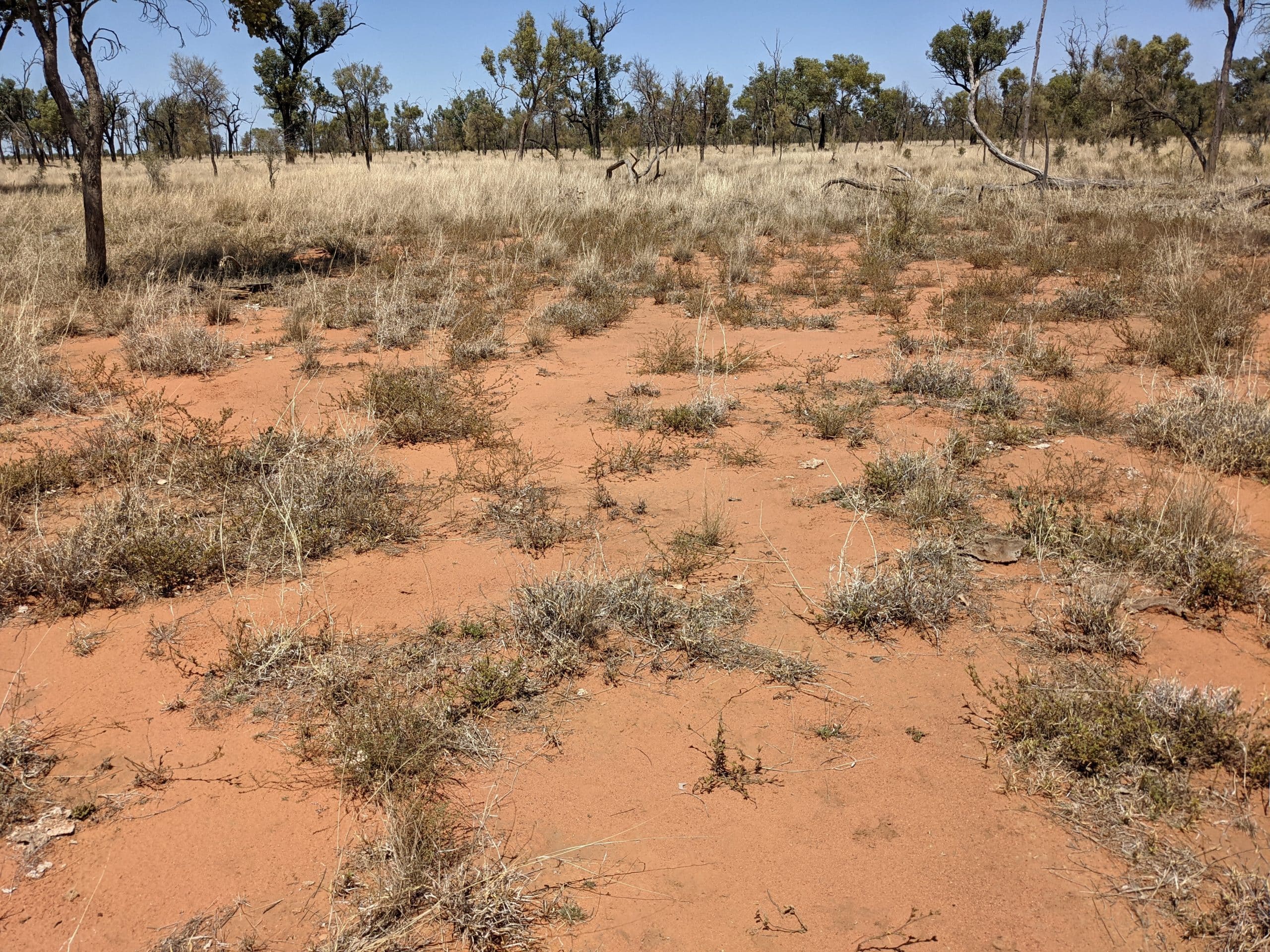 Desmanthus virgatus types continue to show promise and persistence on grey clay soils but I am not yet prepared to claim it will be a long-term success.  From what I have seen, it has better nodulation rates than the stylos but mostly lower forage yield.  As with the stylos, the lines currently used are very mixed genetically and it may take some decades for a really successful type to evolve that is well suited to the environment.

Native weeds that have been encouraged by oversowing pasture species are led by prickly roly-poly, soft roly-poly and galvanized burr.  They are encouraged by the disturbance usually required to facilitate sown grass establishment as well as being significant contaminants in many commercial pasture grass seed harvests.  That contamination is exacerbated by the hairy coverings on the most useful grasses which leads to an inability to screen them out from the main grass seed crop.

Only two native forage plants are sold commercially that are suited to the region, Mitchell grass (Astrebla spp.) and oldman saltbush (Atriplex nummularia).  Mitchell grass, mainly curly Mitchell (A. lappacea), has been sold commercially for over 50 years but only in small amounts compared to buffel grass.  Oldman saltbush is sometimes sold as seed but experience has shown that it needs to be sown as seedling transplants, and watered in western Queensland, to get it adequately established.  However, both have been used only as niche sowings.

No native rangeland legume has been sold in commercial quantities to my knowledge although cooper clover (Trigonella suavissima) and rhynchosia pea (Rhynchosia minima) could be some day.

I was also able to confirm that not a single plant could be found of Rhodesian giant button grass (Dactyloctenium gigantium) that was planted in 1971 over 56 acres (22.7 ha) of desert country near Barcaldine, despite an excellent initial strike.  It is a palatable annual cousin of our native button grass but has weak seed dormancy & expects a regular wet and dry season every year and thus seems unable to deal with our unreliable summer rains under grazing.  The area is now a mix of native pasture and buffel grass.  Happily, Olearia subspicata (known locally as turkeybush) which was once common but of no forge value is now very rare there.

Photo 3. Paddocks of Rhodesian giant button grass (Dactyloctenium gigantium) like that shown above can no longer be seen in desert country near Barcaldine.

A disappointing finding was that some well-established buffel grass pastures dating back to the early 1960s were now being decimated in places by heavy cattle grazing under a feeding program with M8U supplement.  Some such areas in fertile gidyea lands were dominated by prickly roly-poly while others on poorer gidyea soils are currently reduced to copper burrs, soft roly-poly and pigweeds.  Last summer was very dry at both sites and it will be interesting to see if the buffel will resume its dominance once reasonable summer rains return.  I do not think it was an indicator of long-term pasture rundown because plenty of other buffel pastures of similar age are still very strong.

I was also surprised to see some Mitchell grass country in the Tambo district reduced to dirt over extensive areas with cattle having only sparse mimosa bush to eat while nearby places still had good ground cover despite the recent dry seasons (Photo 4).  I had hoped that many years of rural extension about the need to keep adequate ground cover and the huge financial cost of such management systems were a thing of the past, but … 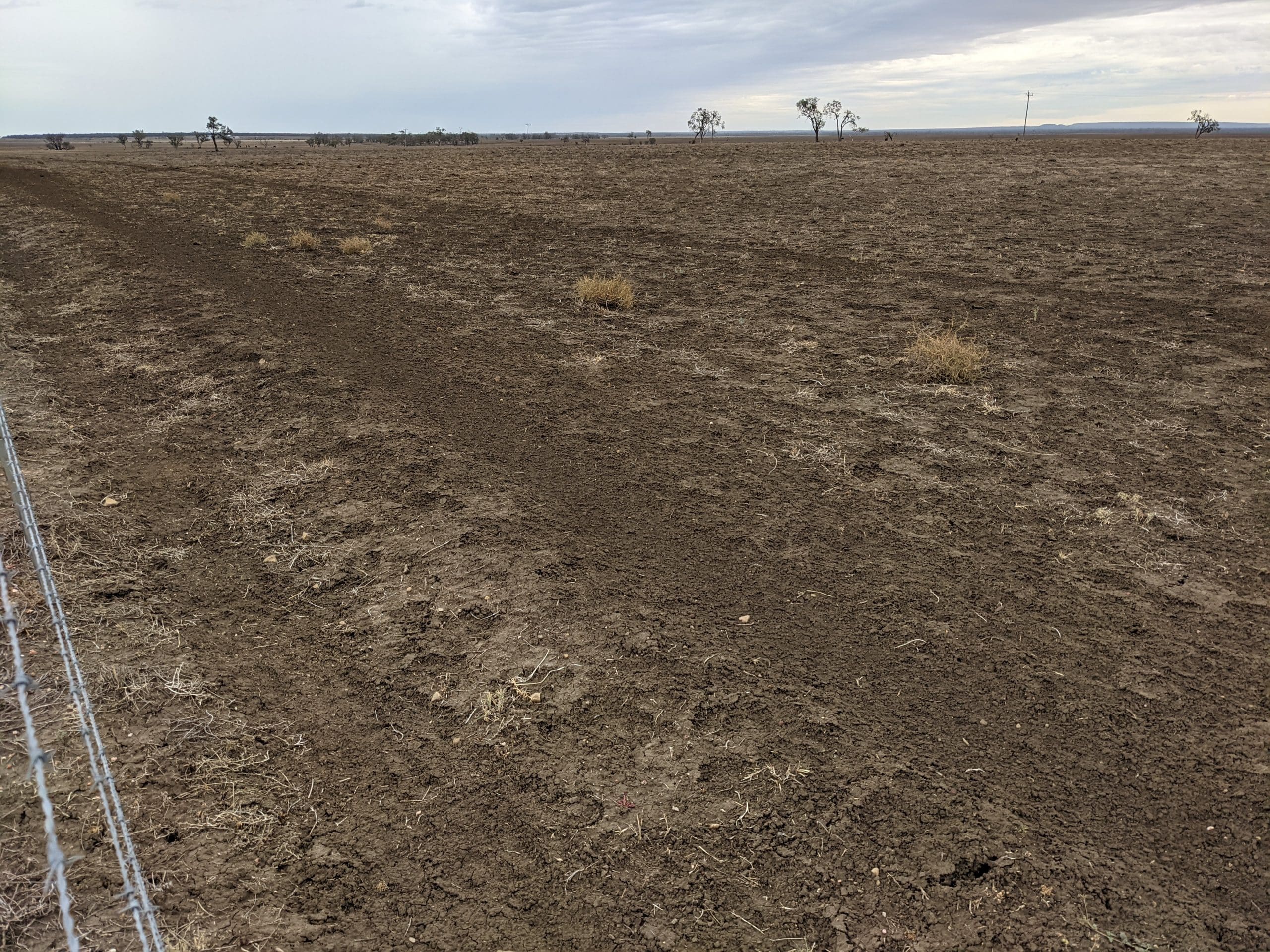