(From the Range Management Newsletter 20/2)

Have you ever wondered about the origins of familiar weeds in the arid and semi-arid rangelands? The Australian Journal of Botany has recently published “Unwelcome guests: a selective history of weed introductions to arid and semi-arid Australia” by Marg Friedel.

Over several years, Marg undertook extensive web-based searches of grey literature including Lucid and archived newspaper articles, as well as searches of published articles and books. She identified distributions of species within Australia and dates of early records from the Australasian Virtual Herbarium (AVH) and Atlas of Living Australia (ALA). Her broad conclusions are summarised in the article’s Abstract:

“Following European settlement of Australia, numerous plant species were deliberately introduced for use in crops, pastures, gardens and horticulture, and others arrived by chance. Many subsequently escaped and became weedy. Of the 54 weed species of natural environments of arid and semi-arid Australia that are considered here, 27 were apparently accidentally introduced, 20 were intentionally introduced and 7 were probably introduced both accidentally and intentionally. Livestock including camels and their harness, and contaminated seed and hay were the most common vectors for accidental introduction. Amongst intentional introductions, rather more ornamental species appear to have invaded successfully than pasture species, but the former generally occupy niche habitats. Recent new introductions are few due to pre-border, border and post-border protections, but many current arid zone weeds continue to spread. Understanding the history of weed invasions can help to guide current and future management by clarifying pathways for introduction.” 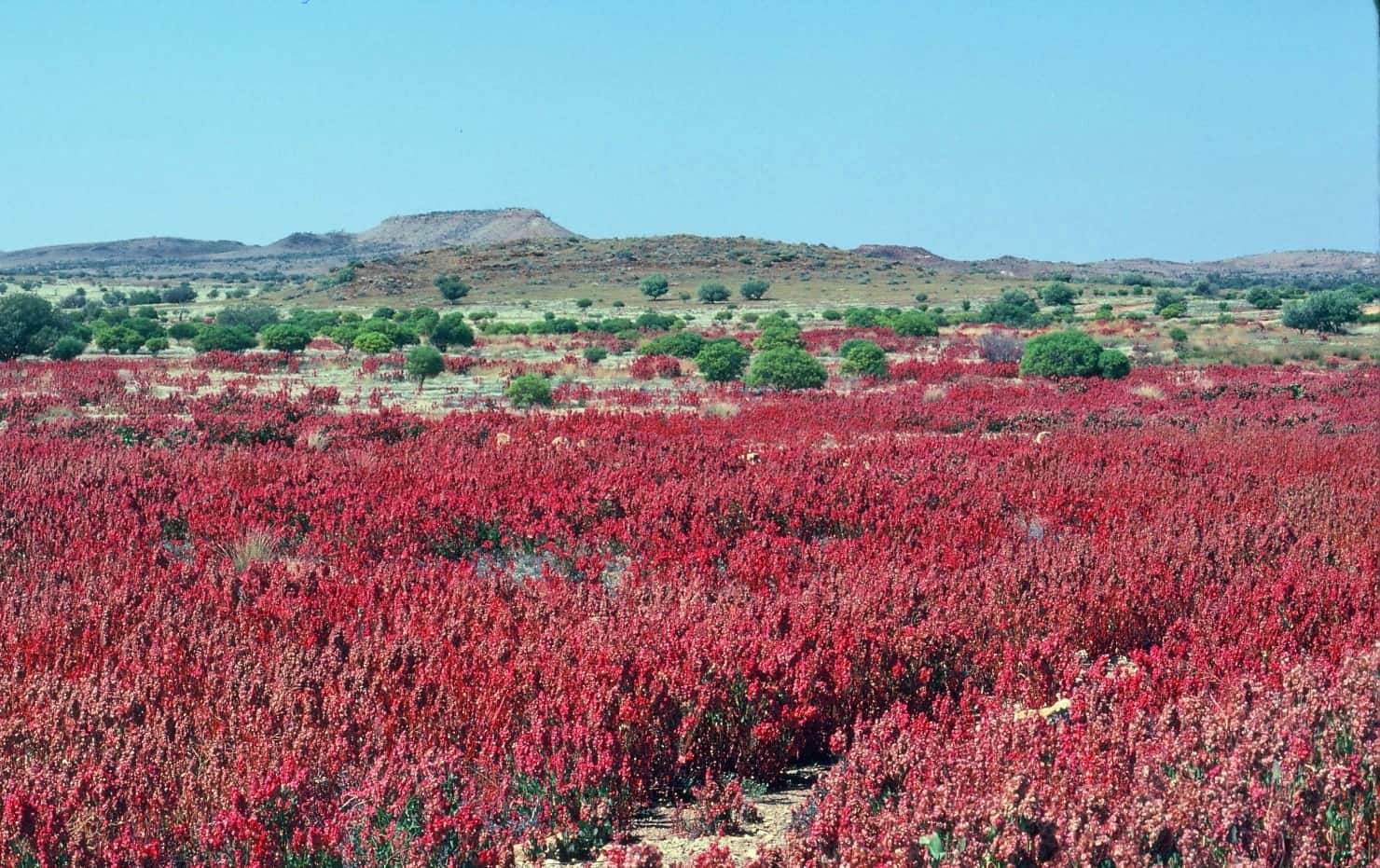 Here’s an example of the story associated with ‘wild hops’ or ‘ruby dock’, Acetosa vesicaria (L.) A.Löve. “Camel harness was almost certainly the source of this species, which was native to the homeland of the cameleers. From the 1860s camels were brought into South Australia via Port Augusta to service communities, pastoral properties and mines in South Australia, the Northern Territory, New South Wales and Queensland (McKnight 1969). From the 1880s, camels were imported via Fremantle (near Perth) predominantly, and other coastal ports to the north, to service Western Australia (McKnight 1969). Acetosa vesicaria (synonymous with Rumex vesicarius) was first collected near Perth in 1892, and subsequently on camel routes throughout the interior. It was later planted in domestic gardens due to its showy flowers. For example it was introduced to a garden in Alice Springs by lawyer Beecher Webb’s wife, who brought it from her family home in Broken Hill (the location of an earlier camp or ‘Ghantown’ of the cameleers) between 1932 and 1935. It subsequently colonised the surrounding region (M. Hall, D. Nelson pers. comm.). The species was considered early on as a potentially useful introduction: ‘Another spinach, the Rumex vesicarias [sic], is one that might be grown here to advantage’, The Argus reported in 1868 (Anon.1868), regarding the growing of plants in ‘the portion of the [Melbourne] Botanic garden devoted to the experimental culture of useful productions’, although I found no evidence that it was ever planted [for that purpose].”

The full Open Access article is available on the Australian Journal of Botany’s website https://www.publish.csiro.au/bt. Look for Volume 68 Number 2 2020.