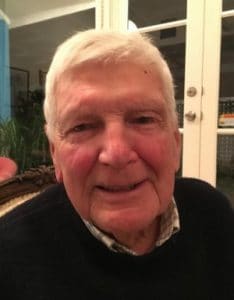 The Australian rangelands community is the poorer for the passing of Andrew David Nicolson on Saturday 2nd June, 2018 aged 86 years – but much the richer for the legacy Andrew created.

Andrew was born third generation into a pastoral family on Middleback Station properties near Whyalla. The family’s story is told in Andrew’s recent book “Wizzo – the Story of a Well and the Nicolson Family”, published last year (see the review of this book in RMN 17/2).

Many people benefited from Andrew’s quiet, deep wisdom and generosity – visitors to Middleback Station (including many generations of rangeland students from the University of Adelaide, and those on field tours from various conferences), participants in meetings of the then South Australian branch of the Australian Rangelands Society, and more recently, visitors to Adelaide Botanic Gardens where Andrew reinvented himself as a garden guide and impressed visitors with first-hand accounts of Australia’s arid vegetation, particularly in the mallee section which has examples of many species on Middleback.

Some of us, myself included, benefited from Andrew’s generosity in assisting us with our research and teaching – allowing us to use the shearers quarters and station facilities, fetching sheep for grazing experiments, unblocking blocked septic systems overloaded by students on camp, and most valuably, sharing his wisdom as a scientific collaborator to benefit our work.  Perhaps his most generous act was his agreement to the building of a large field centre with research and teaching facilities within shouting distance of Middleback homestead.  Along with the Shearers Quarters, this served as the base for up to four student camps per year, and, on occasion, host to research workers from as far afield as Lund University in Sweden and St Johns in Newfoundland.   When the association with the University of Adelaide was formalised in a Joint Venture between the Nicolsons, the University, and the SA Minister for the Environment, Andrew chaired the Board throughout the life of the Agreement.

Andrew was a well-educated man. He was an agricultural science graduate from the University of Adelaide who, upon graduation, worked as a sheep researcher for the CSIRO at Cunnamulla before returning to Middleback.  A lifelong learner and assimilator of diverse knowledge, Andrew integrated knowledge of geology, botany, animal production, sheep genetics (one of his father’s interests), economics and people, and applied it to his work on Middleback. Andrews’s son ‘young Andrew’ – now known to many of us a ‘Nico’ – recalls how Andrew’s grandkids received dissertations on the biological significance of the shapes of leaves and other such topics as they drove with him around the property!  And… Andrew also knew all the kings and queens of Britain since 1066 and the stories of their ascent and demise!

At last year’s Australian Rangelands Conference I interviewed Andrew and Nico on the occasion of the publication of Andrew’s book.  I think this session was one of the highlights of the conference.  Andrew would happily have talked for much longer than the 30 minutes we had allowed! 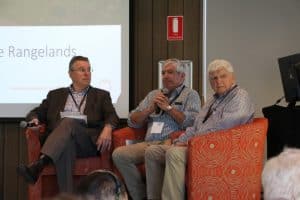 Here are some of the highlights:

Andrew had some interesting views on the long, drawn out negotiations around the resumption of the lease, but it didn’t dampen his enthusiasm for his botanical and other interests.   Along with friends from his University days, he joined the volunteer guides at Adelaide Botanic Gardens soon after his ‘retirement’ to Adelaide where he enjoyed meeting people from all over the world and, perhaps, explaining the biological significance of the shapes of leaves and other such topics as the visitors (no doubt a poor substitute for grandkids) walked with him around the Gardens.

Nor did it dampen his generosity.  He was active in volunteer activities not much more than a month before he died.  And in his last few days he donated all his botanical notes, accumulated over 17 years, to the most recent intake of Guides, as well as providing historical information to the new owners of Nonowie, the perpetual lease to the south of Middleback.  The Western Myall country he grew up in was never far from his thoughts.

A quiet, unassuming, very thoughtful man whom we shall all miss.

Thanks to Nico, Des Coleman, Carolyn Ireland and Noelene Duckett for their reviews and additions to this article.