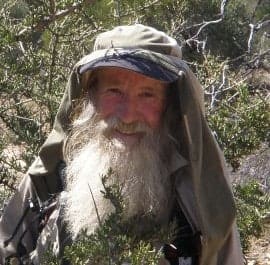 With the passing of Peter McRae in early Spring 2018, Australia’s rangelands lost one of their great naturalists, champions and characters. Pete spent most of his life in the dry country of Australia, growing up in the Riverina town of Finley. His early interest in the natural world progressed from observing and collecting insects and rocks to a science degree at the Australian National University. He took some time out camping in north Queensland, collecting tropical butterflies that would become part of his extensive, meticulously-pinned and curated collection. Upon finishing University he worked for seven years as a lab technician at Griffith University.

In 1984, he moved west to Charleville, to take up a job with Queensland National Parks studying macropods. This work took him across vast areas of western Queensland. When he wasn’t working, he was wandering around in the bush, getting to know the plants and animals of the red-dirt scrublands that he rapidly became obsessed with. The locals didn’t know what to make of the shirtless, bearded, teetotal hippy who frequented the swamp behind DPI at night in search of frogs. Pete soon adopted some of the local customs – smoking, drinking and playing music at B&S balls. But the natural world remained his focus and inspiration.

In the mid-80s, he was part of a small team surveying the cryptic and poorly-known yellow-footed rock wallaby in the stony hills north-west of Adavale. He loved the wildness of the hard, hungry hills he called ‘goanna per fortnight country’, and spent weeks poking around in gorges, boulder fields and seldom-visited nooks. In fact, I suspect that many of these sites were not visited by a human again until Pete returned to see how these beautiful wallabies were going in surveys between 2010 and 2013.

But it was an opportunity in the late 1980s to undertake bilby surveys in the Channel Country that proved life-changing. It took Pete and Rob Atherton hundreds of hours spotlighting across the vast inland plains to finally see these elusive marsupials – although they knew they were there from their extraordinary burrow networks. Pete and Rob camped out for weeks at Number 2 Bore on Davenport Downs, on a treeless plain that would have to rate as one of the most inhospitable places on earth: dust storms, thunderstorms, constant howling wind, freezing winter nights and temperatures frequently exceeding 50 degrees in summer. Reading Pete and Rob’s field notebooks from this time you get a sense of how dedicated they were and how much they loved what they were doing – and how workplace health and safety will ensure, for better or worse, that no public servant is ever shaped by such harsh forces to the same degree again. 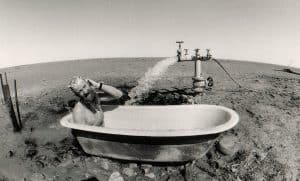 Eventually a caravan, then – the height of luxury – a couple of dongas and the famous Astrebla bath-tub, were towed out to the site. The Davenport store paddock became Astrebla Downs National Park in 1996, and Pete continued to work out there until what would be his final trip in 2014. It was the place he loved above all others, and he was never more at home than when out in the ‘big country’ for weeks on end, monitoring burrows, radio-tracking bilbies, trapping them for the captive breeding program he established in Charleville, collecting plants, observing ants and termites, doing vegetation transects and photo sites, and spotlighting until the wee hours with a pannikin of bourbon spilling over his lap as the vehicle bounced over the lumpy cracking clay. By the end of these nights, he would have a notebook full of observations and meandering thoughts of a practical or philosophical nature – and a very wet pair of jeans. Reading through Pete’s field notebooks, it is common to come across notes about kowari or bilby behaviour he had observed and counts of spiders and night jars, interspersed with musings on the nature of particles, the universe and humanity’s place in it and reminders to fix the generator or put up a new windsock at the airstrip. 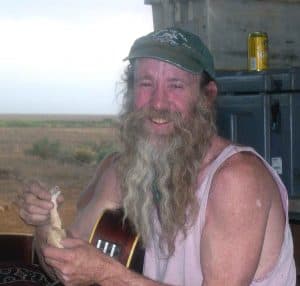 Photo 2:  The end of the day at Astrebla Downs (photo – Tracy Wattz)

These notebooks provide a poignant insight into Pete’s mind: constantly curious, driven by a love of the natural world, creative and extremely practical. He had all the skills needed to survive and thrive as a scientist in one of the harshest environments on earth. It is difficult to imagine anyone who was so at home in a place, walking through the scrub or lying under a tree, attuned to the life happening all around him, discussing the ‘big issues’ long into the night propped up against his old swag beside the fire embers as the universe spun.

Heading west out of Charleville with Pete, you never knew what adventures would be in store. There were few plans, no rules, and everything would happen at ‘half past’. One of Pete’s great loves was the world of ants and termites, and he spent hours observing their movements and activities, and collecting specimens in a contraption he had designed specifically for the purpose. He spent hours marvelling at and photographing the spiny architecture of the burrs that are the bane of everyone else in western Queensland; taking waypoints and photos of every plant, animal and landscape feature that crossed his path; collecting specimens of plants, insects and animal poo that would often end up behind the car seat to be found months or years later alongside something unrecognisable from the hotbox at the Cunnamulla roadhouse. 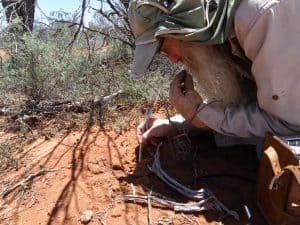 His legacy will live on at Currawinya National Park, where with funds raised by Save the Bilby Fund and teams of Conservation Volunteers, Pete designed and built a 29 km2 predator-free exclosure. The initial bilby release in 2005 was successful, and Pete spent many hours spotlighting and radio-tracking the bilbies. The fence has now been repaired and cats eradicated after a breach in 2011, and bilbies are once again due to be released later this year.

He will also live on at the Charleville Botanical Reserve, which he was instrumental in establishing. Work is being done to realise Pete’s vision of a place where visitors and locals can learn about and enjoy the vegetation of the Mulga Lands. He also leaves behind vast collections of data and specimens, field notebooks, beautiful photographs, maps and audio recordings – of the natural world and his own slide guitar compositions.

Pete’s verandah became one of the archetypal watering holes of western Queensland. People came, sometimes alone, sometimes in small groups, sometimes large. Ideas were discussed, friendships and working relationships forged, advice freely given. Laughter and talking continued until early morning walkers and roosters reminded the stayers that it might be time to head to bed.

There are hundreds of people around the world today who know and care about Australia’s rangelands because they crossed paths with Peter McRae. He was unfailingly generous sharing his knowledge, teaching the names of trees and shrubs, birds and animals. Places that can seem monotonous, uninteresting and inhospitable were revealed through Pete’s eyes as natural wonderlands. He was driven by the knowledge that humans are merely one part of an intricate whole, and that respect, care and knowledge for other creatures with whom we share the planet underpins our own survival. 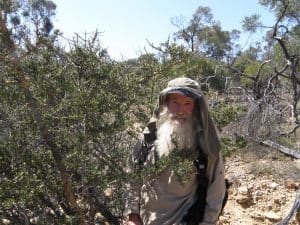 Photo 4:  Peter McRae with one of his much-loved spiny shrubs, while surveying yellow-footed rock wallabies in the Grey Range in 2012, revisiting sites he had visited 25 years before (photo Jen Silcock).

He became well-known as ‘the bilby man’, but his passions and knowledge were so much broader, as was his influence. Pete felt like such a part of western Queensland – Astrebla Downs and the big country, Currawinya and the bilby fence, the Charleville Botanical Reserve, his welcoming verandah in Charleville – it was like he would always be here. Pete did not believe that there was anything else after this life; and indeed he marvelled at the universe and everything in it like it was his last day on earth. But part of him will always be out there, in those places he loved so much and shared with so many.