(From the Range Management Newsletter 19/3) 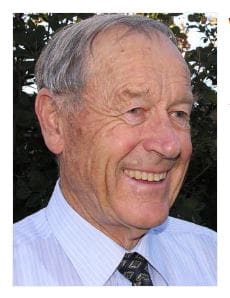 That stalwart of the Australian Rangeland Society, Adjunct Associate Professor Ralph ‘Wal’ Whalley of the University of New England (UNE), will be retiring from his positions as a member of the Society’s Publications Committee and Associate Editor of The Rangeland Journal from 31 December 2019.

Wal was a founding member of the society in 1974 and has served it in various capacities almost continuously ever since. He was Chair of the Editorial Committee of the Australian Rangeland Journal from 1976-78, an Associate Editor of that Journal and its successor The Rangeland Journal (TRJ) from 1990-98, Editor of TRJ from 1998-2011 and an Associate Editor from 2011 to the present.  Wal not only carried out all these roles with remarkable commitment, he was always willing to act as an advisor to others from authors to Editors-in-Chief,  aiding with his keen insights, and using his experience to help with bottlenecks in the editing and publications process.  Knowing Wal was available, either to assist directly or simply as wise counsel, was extremely reassuring. For much of the time that he held editorial positions with the Journal he was also a member of the Publications Committee where his experience and wise counsel were again highly valued. It can be confidently stated that no one has made a greater or more sustained contribution to the development and continuing success of the Society’s official publication. With the untimely death of then Editor-in-Chief Professor John Milne in September 2015 Wal immediately volunteered to take over the role in an interim capacity until a new appointment could be made. His willingness and ability to take up the reins again in this crisis situation ensured that what could have been a difficult and disruptive transition occurred almost seamlessly, and probably unnoticed by anyone except those intimately involved.

Apart from his commitment to the Journal Wal has also served the Society in a range of other capacities. He chaired the Organising Committee for the 4th Biennial Conference at Armidale in 1986 – those who attended will never forget the barbecue held in sub-zero temperatures – and was Tour Co-ordinator for the 1984 International Rangeland Congress in Adelaide. He was a member of the Organising Committee for the very successful ‘Restore, Regenerate, Revegetate’ conference at UNE in 2017 and one of the guest editors of the major special issue of TRJ that resulted from it. He and his wife Pam have been familiar faces at rangeland conferences both nationally and internationally for many years and have a worldwide network of close professional colleagues and friends as a result.

In the course of his academic career Wal has been a long-standing champion of the conservation and sustainable management of native grasslands, promoting the cause of native species long before it became fashionable. He is a co-author of the book Grasses of New South Wales, first published in 1982 and now in its fourth edition. His passionate support for the role of the native grasses in Australian ecosystems is illustrated by the statement ‘Save the grasses!’ at the top of his e-mail signature block.

He has co-authored at least two other books, contributed nine book chapters and produced around 90 journal papers and 50 conference papers. Over 50 postgraduate students, about half of them PhD’s, have benefited from his direct supervision and many others have experienced his wide-ranging mentorship. Many authors contributing to TRJ would be grateful for the painstaking efforts that Wal applied to their manuscripts to ensure that they met the high scientific and editorial standards that he set.

In recognition of his outstanding contributions to rangeland science and the Society, Wal was appointed a Fellow of the Australian Rangeland Society in 2012. Further, Wal is one of nature’s gentlemen and well-liked by all who have met and worked with him. We wish him and Pam the very best as they move into a less active phase but expect that Wal will not entirely sever his links with the Australian Rangeland Society.