WOODY COVER CHANGE IN GRAZING LANDS OF NORTHERN AUSTRALIA SINCE 1988

(From the Range Management Newsletter 20/3)

Why do we care about woody cover?

Trees are a natural part of our landscapes but they can have both negative and positive effects on pasture growth, depending on the situation. They can compete with the pasture layer for soil nutrients and water and lead to reduced pasture growth, especially on the most fertile and productive land types. Conversely, trees on low nutrient soils can sometimes promote pasture growth because they add nutrients to the soil surface from their leaf fall and the shade and shelter they provide improves the microclimate by decreasing soil temperature and evaporation.

Woody vegetation thickening can change grasslands to closed woodlands and forests with little pasture growth underneath (see examples of woodland thickening in Figure 1 and 2). This can lead to declines in birds that rely on grassland habitat across Northern Australia. Once a forest establishes it can be difficult to reverse, even with fire, because the trees prevent grassy fuels from building up. 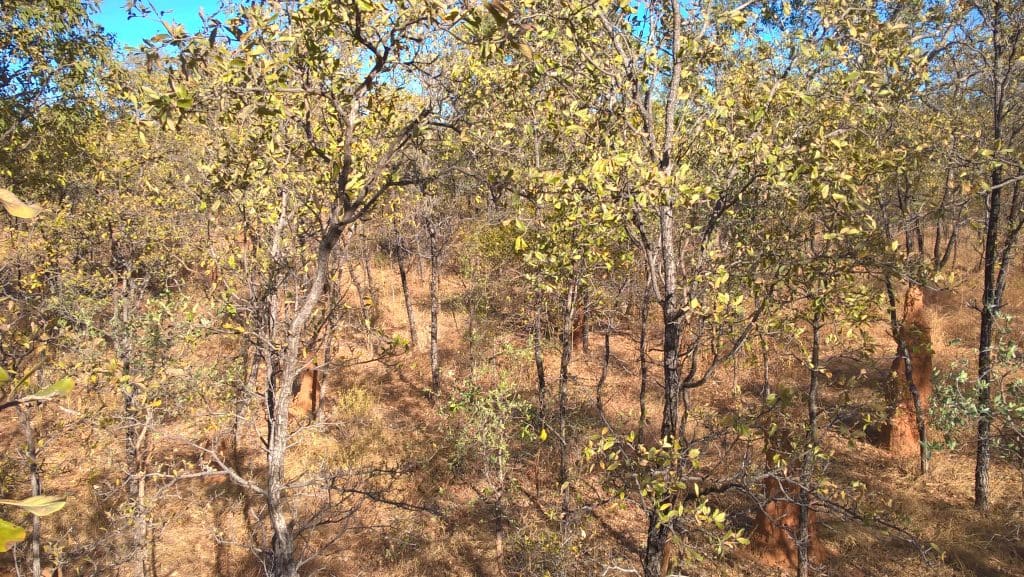 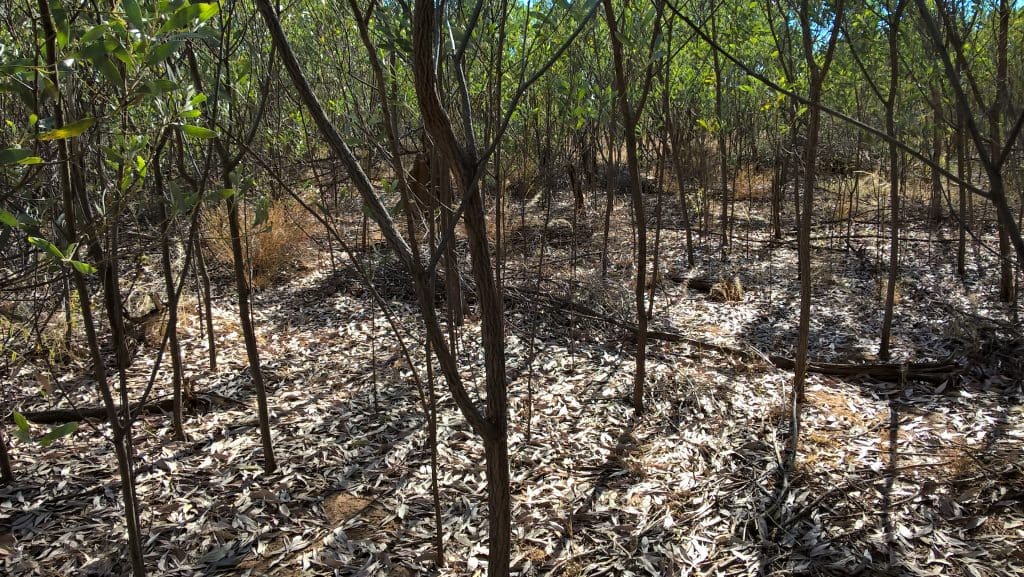 Soil type, rainfall and atmospheric carbon dioxide levels all affect the carrying capacity for woody plants (the maximum potential woody cover that a site can grow). Clay soils tend to have lower woody cover, and woody cover increases with rainfall. Increasing concentration of carbon dioxide in the atmosphere is implicated in woody vegetation increases worldwide. Conversely, drought can lead to extensive die-off of woody plants. Changed water flows across the landscape due to land condition decline can also influence woody cover.

Landscape use can influence whether woody cover reaches its potential for that environment. Anything that consumes woody plants, like fire or browsers (giraffes, elephants, the now extinct browsing giant kangaroos) can reduce woody cover. Conversely, grazing of the pasture layer can indirectly lead to increased woody cover by reducing the fuel to carry fires, and hence reducing the consumption of woody plants by fire. Heavy grazing of the grass layer also increases woody plant growth by reducing competition from the pasture for water and nutrients and by decreasing the shading of emerging woody plant seedlings.

Landsat satellite vegetation cover data is available from 1988. We can use it to assess ground cover and woody (trees and shrubs) cover trends through time over the last 30 years. Persistent green cover is the cover that stays green all year round and is used here as a proxy for woody cover.

We collated Landsat-derived cover data for more than 150 grazing trial paddocks across Northern Australia. Although these paddocks are not necessarily representative of entire regions (the Victoria River District (VRD) and Barkly trial paddocks tend to be mostly black soil, while the Katherine paddocks tend to be more red soil), they do offer insights into where and how much woody cover is increasing (Figure 3).

In the Alice Springs region there was no real trend, fluctuating between 4 and 9 per cent woody cover throughout the 30-year period. In all other Territory regions woody cover increased by 60 to 85 per cent over three decades. This is not something you would notice year-to-year. The average increase in woody cover per year was only 0.1 to 0.4 per cent. Our landscapes have been altering “slower than the eye can see”, as Daryl Lewis wrote in 2002 in his case study of woody thickening in the VRD. Woody increase appears to have plateaued in the VRD and Barkly after 2006, but not in the Katherine region, where it continued rising until 2016. 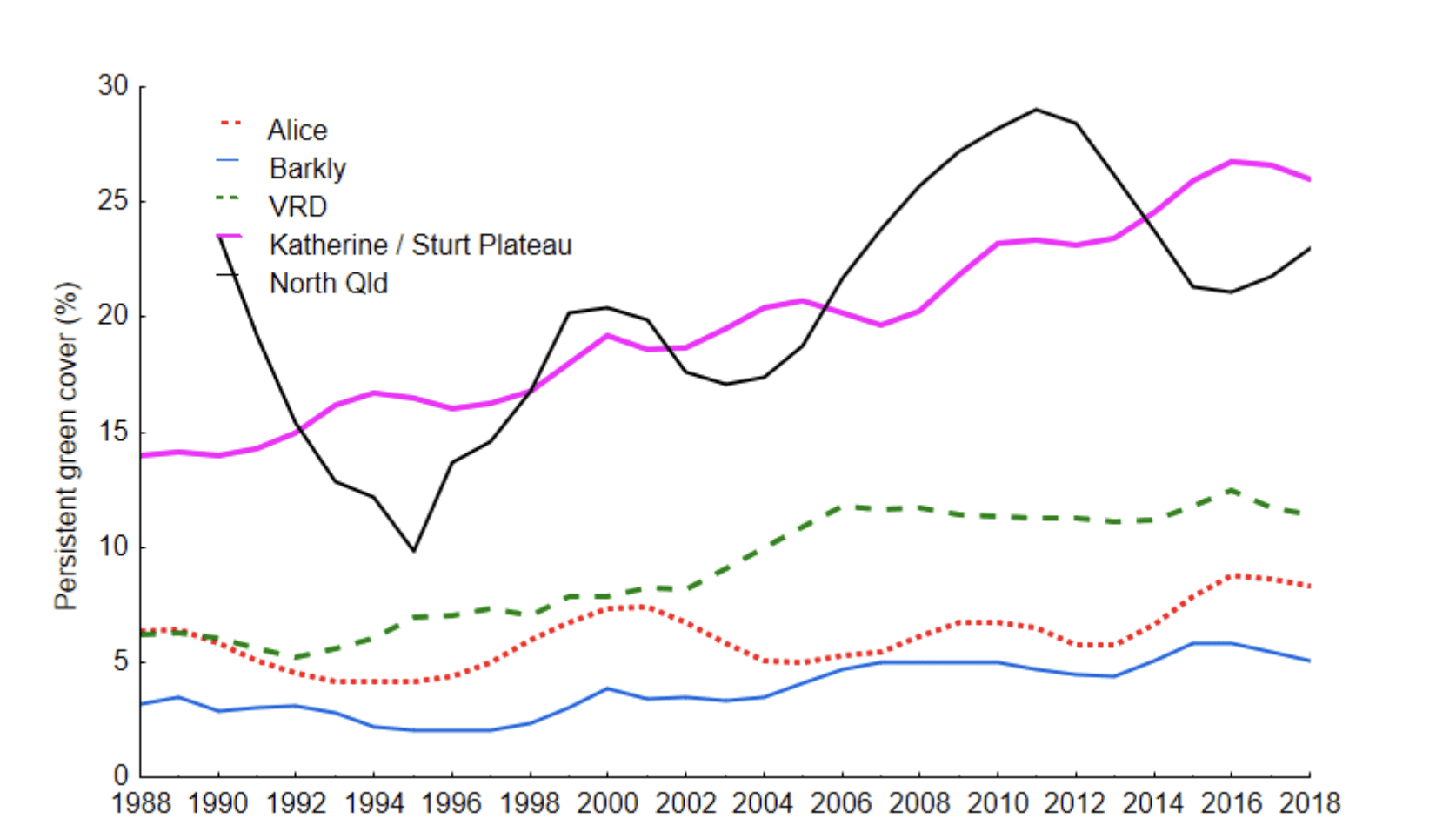 The Queensland sites had much greater variation in woody cover over time than occurred in the Territory regions, possibly reflecting the more frequent extended dry periods in eastern Australia. Woody cover fluctuated in tandem with the trends in rainfall, crashing with extended droughts (Figure 4) and increasing in wetter periods, finishing at similar levels to 1988. Drought index was highly correlated with woody cover patterns through time, explaining 66 per cent of the variation. 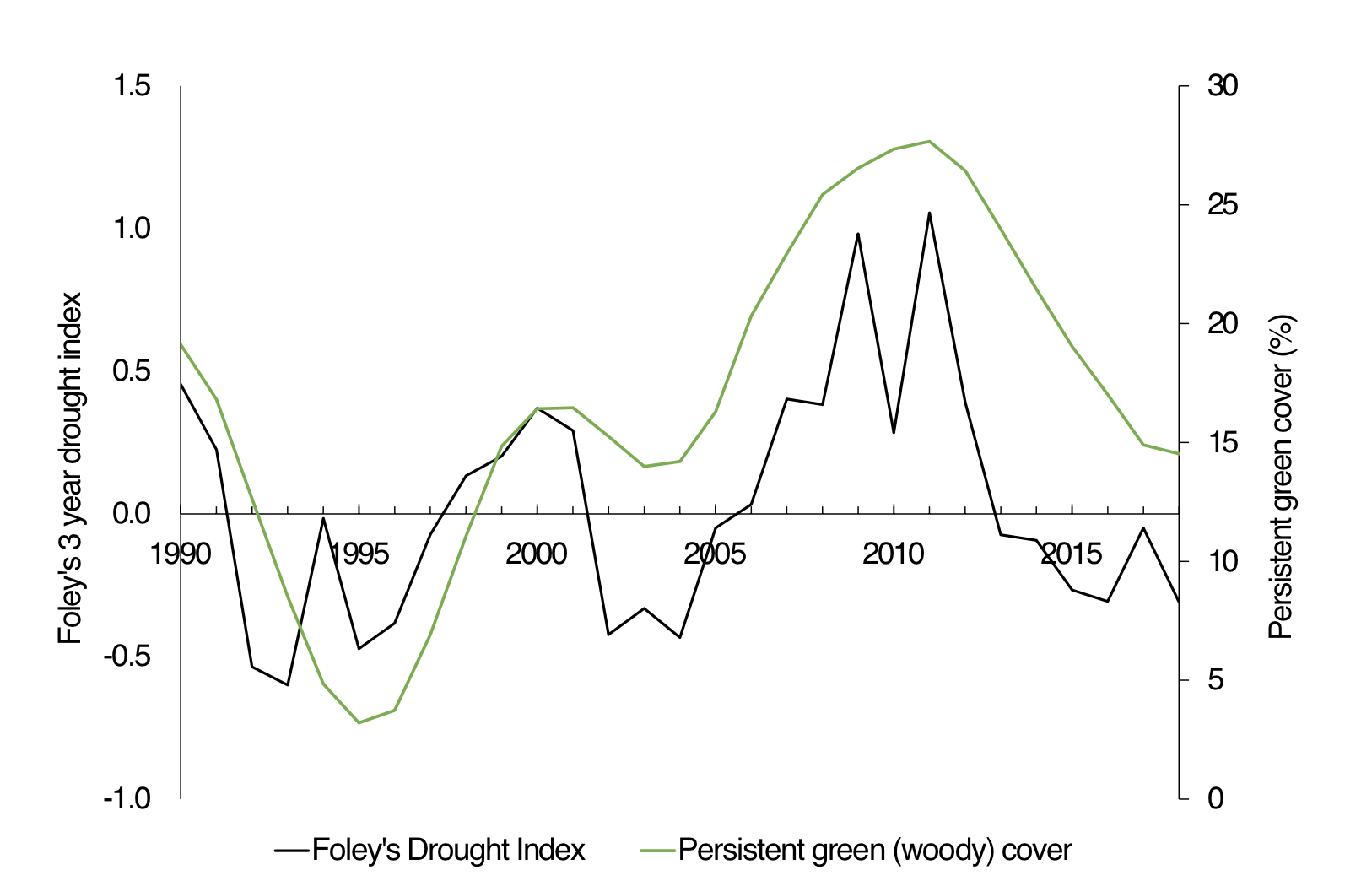 There is ongoing debate about whether rainfall, or grazing and fire are the predominant factors affecting woody cover on grazed lands. Woody cover increases during above-average rainfall years are often reversed in drier periods with mass tree dieback. In the Queensland example, natural fluctuations in woody cover appear to have reversed with drought.

But what about where woody cover is still increasing in the Territory? In the next article, we’ll look in more detail at factors affecting woody cover change at Kidman Springs and what that can tell us about managing our grazed landscapes.

Thanks to the Remote Sensing Team from Queensland Department of Environment and Science for providing Landsat cover data for grazing trial paddocks.